Numerous articles and case studies have laid out the kind of value drones can provide to mapping projects of all types when it comes to making them faster, cheaper or safer. However, whether or not these efficiencies can be expanded beyond a particular project is often a question, which leads us to the scalability problem that many UAS aerial survey projects face.

While the capital investment in UAS technology to achieve definable value can be relatively low, there can still be significant costs associated with project set-up and data processing. These factors need to be managed if UAS implementation is to move beyond single projects or only used by one team within an organization to enterprise-level deployment.Insights around what it means to do exactly that were discussed at Commercial UAV Expo Europe. There, presenters and speakers talked through what kind of considerations users of UAV survey mapping data are taking into account as they undertake large, even national-level, projects to help solve these scalability issues.

The costs are not necessarily in the technology

During the UAV Surveying as Standard Tool in Infrastructure Construction session, Philipp Mielke from the pan-European engineering firm Strabag outlined how the company has utilized drones to create an internal UAS survey program in support of large infrastructure construction projects. With typical projects being a minimum of 5km in length, one might be inclined to think that this is a program that would be the first to deploy high-end platforms and sensors. Perhaps long range heli-platforms equipped with lidar would be a fit?While the firm does indeed deploy a larger platform lidar-equipped platform on specialist projects, the UAS platform that is allocated to every pair of surveyors across its 117-person survey group is a relatively low-end photogrammetric drone. This works for them because for monitoring construction progress, UAS implementation can cut the time of survey work in half. However, the amount of time required to process all of this data cannot be underestimated. It’s the reason that costs associated with this technology aren’t so much about the technology itself, but the processes to effectively utilize it. They had the numbers to illustrate that difference. 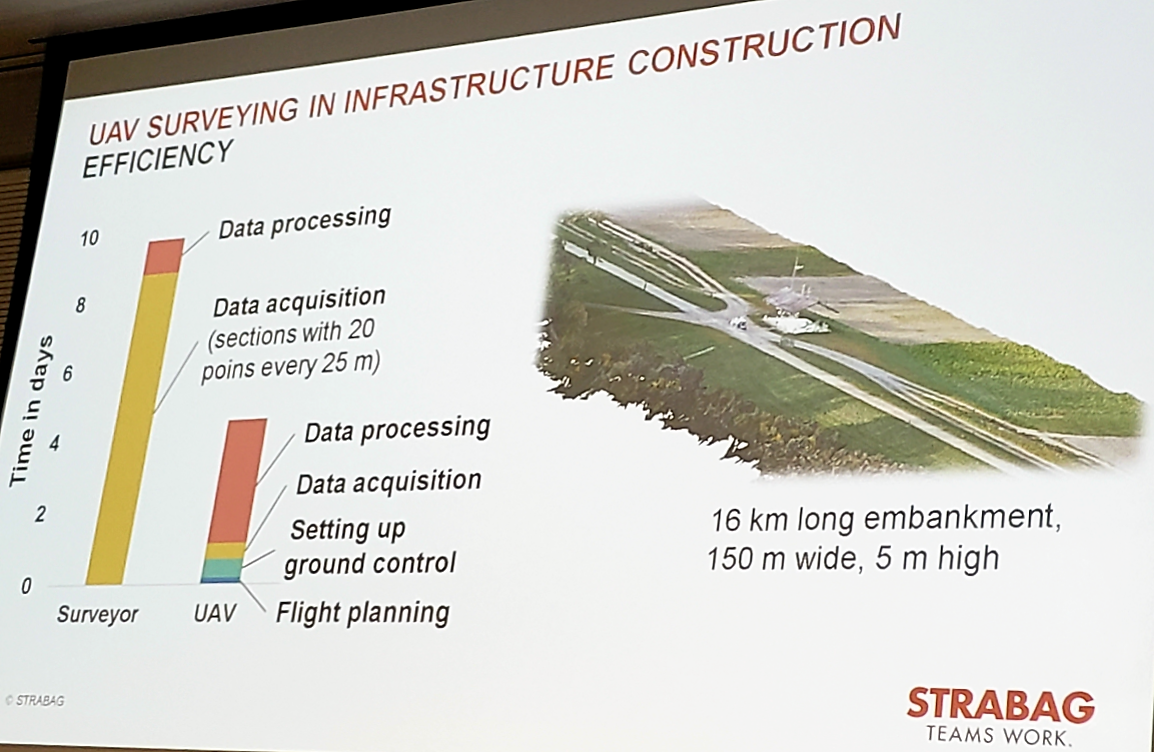 For the types of long-range projects that Mielke was discussing, photogrammetric methods are cheaper and still collect more data than is often required. It’s why Strabag has developed innovative techniques for smart point cloud reduction that not only decrease overheads when moving datasets between project teams but also minimise the extent that the manually intensive task of break line production needs to be undertaken. It has enabled them to get better control over the costs of drone technology that aren’t really about the drones themselves.

Jeroen Luisink of Het Waterschapshuis (the Netherlands’ Water Board) is charged with managing the program to update and maintain the national-level height dataset (the ‘Actueel Hoogtebestand Nederland’, aka AHN) that is used to manage flood risk across a country that has so much land below sea-level. His presentation explored how and why drones really are just another tool, mostly because the information they gather via drone is subject to the same data quality and control rigours as data that comes in from any other source.Up until now, the main data source of the AHN has been lidar data collected from manned airborne platforms. Its’ characteristics have evolved in line with the characteristics of lidar sensors available at the time, progressing from a dataset at a resolution of 1pt/16m2 at the inception of the first version of the AHN (AHN1) in 1997, to 1pt/1m2 by 2004. That continued through to the 10cm in the second incarnation of the model (AHN2) from 2007-2012. By the end of AHN2, the model was classified into ground and above ground structures.During the third iteration of the program (AHN3, 2014-2019) that will be coming to an end very soon, there has been a requirement for the model to be further classified into ground, water, building and civil infrastructure classes. The next iteration of the program (AHN4, 2020-2022) is intended to increase acquisition and data delivery time and to provide new tools of the analysis and downloading of portions of the model. It will essentially investigate the extent to which it is now possible to manage a “living elevation model”.To move towards this vision, Jeroen’s team are considering input from and the variable update cycles that are possible due to the multitude of platforms that can now collect lidar data. These include fixed-wing and rotary manned acquisitions along with sensors mounted on trains and autonomous vehicles, in addition to UAVs. They also need to consider their efforts from a larger perspective, because the dataset has been open source since AHN3. 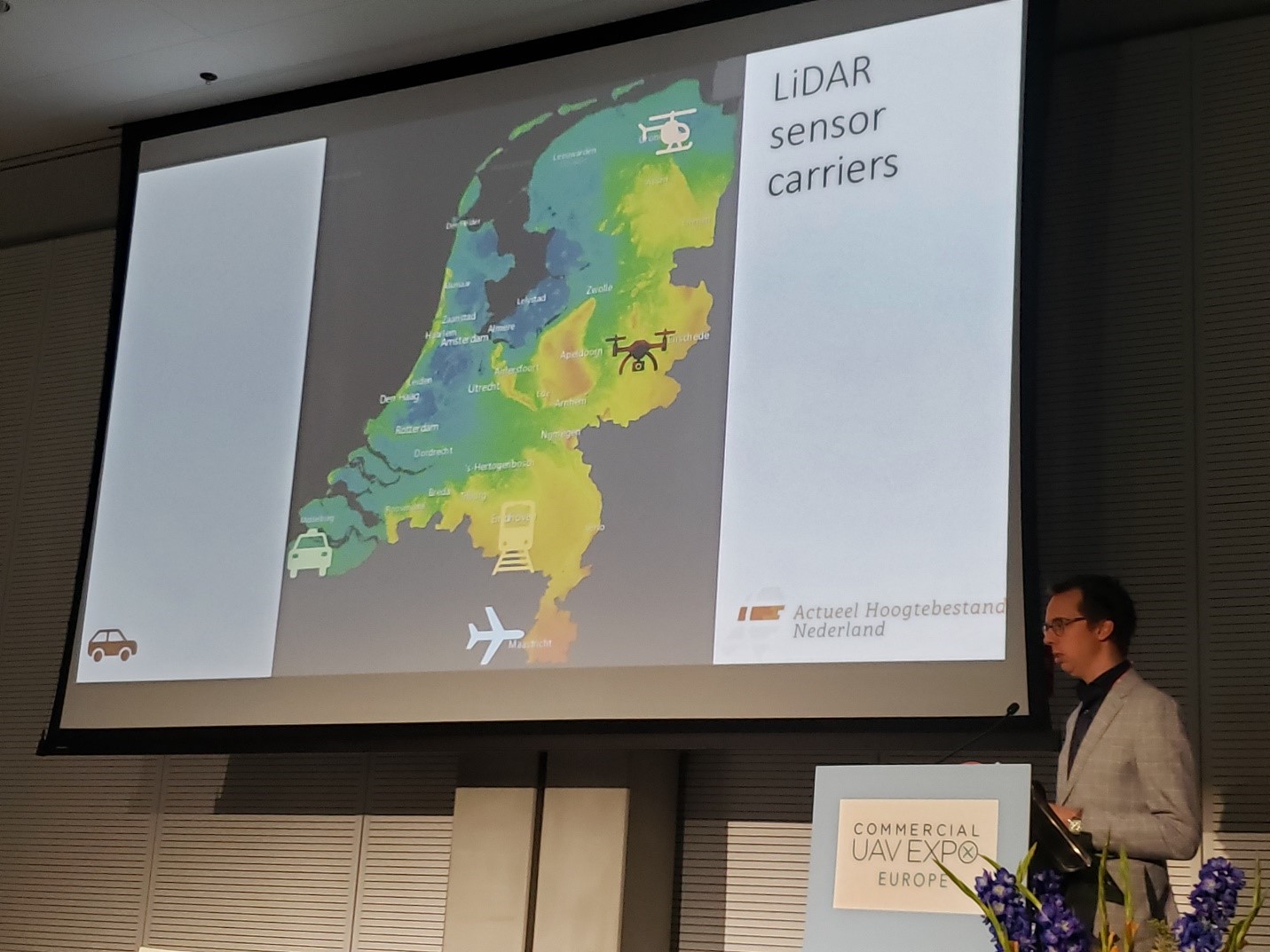 Drones and a variety of other data capture tools have made it possible for Luisink ‘s team to receive updates of local areas on a monthly, weekly or even daily basis. This isn’t a simple endeavor though, as the different altitudes, perspectives and methods used to collect all of this data can make it a complicated process. It has led to questions that Luisink has had to work through on multiple levels.What is the data processing regime that needs to be applied to assimilate all of this data into the AHN?  How do you validate relative and absolute accuracies?  Due to the increased importance of classifying different types of surface structure, what is the effect of differing point cloud densities between data?  How do you account for geometric ambiguities in data from different platforms?  Do data uploads replace what exists already, or can smart selection methods be used to update only what needs to be?  How automated can any of these processes be?All of these questions need to be answered, and those answers have very little to do with whether or not a drone was used to capture that information. 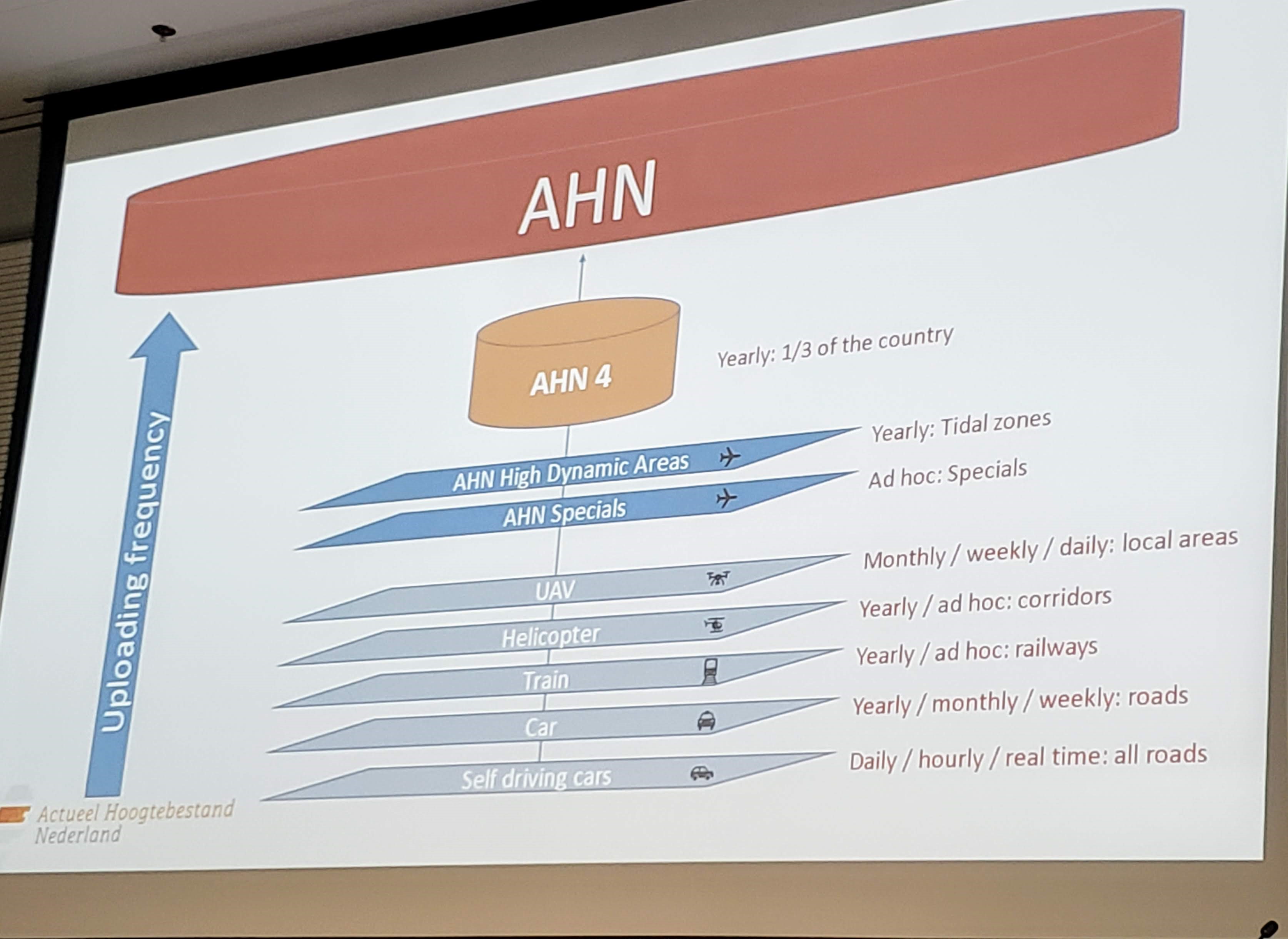 Potential update frequencies of the AHN from multiple platforms

UAS methods clearly provide opportunities to increase the frequency of data throughput into these programs, but it is not the technology that requires the most amount of consideration. What’s most important is how all these different means of data capture are used to propagate a definable outcome or deliverable. It’s why the biggest investments often come in testing and configuration.

Technology choices need to be fit for purpose

Drones provide the most value when the technology is deployed to capture data that could not previously be collected.  To illustrate what that value can look like, Ronan O’Toole of the Geological Survey of Ireland (GSI) presented on another national-level project, which was centered on the collection of data at the intertidal zone around the coast of Ireland. This is a dynamic zone that is difficult to access by traditional methods that often requires new data to be collected for specific projects. UAS provides the access capabilities as well as the economic and deployment efficiencies for collecting data in such challenging environments.The accuracy of height models is critical for these types of applications. Accuracy in the vertical axis is the weakness of any GPS technology.  While my personal view is that ground control points (GCPs) should always be used in mapping projects regardless of the positioning technology used, Ronan discussed real-time kinematic (RTK) implementation on ‘affordable’ drones and how that had already improved the data quality on GSI projects. No matter the approach, the reality is that increased sophistication will also bring higher technology costs. It will be interesting to see the extent to which DG is implemented on GSI projects moving forward.Ronan O’Toole describes the use of RTK equipped UAVs on intertidal zone projects since 2015. 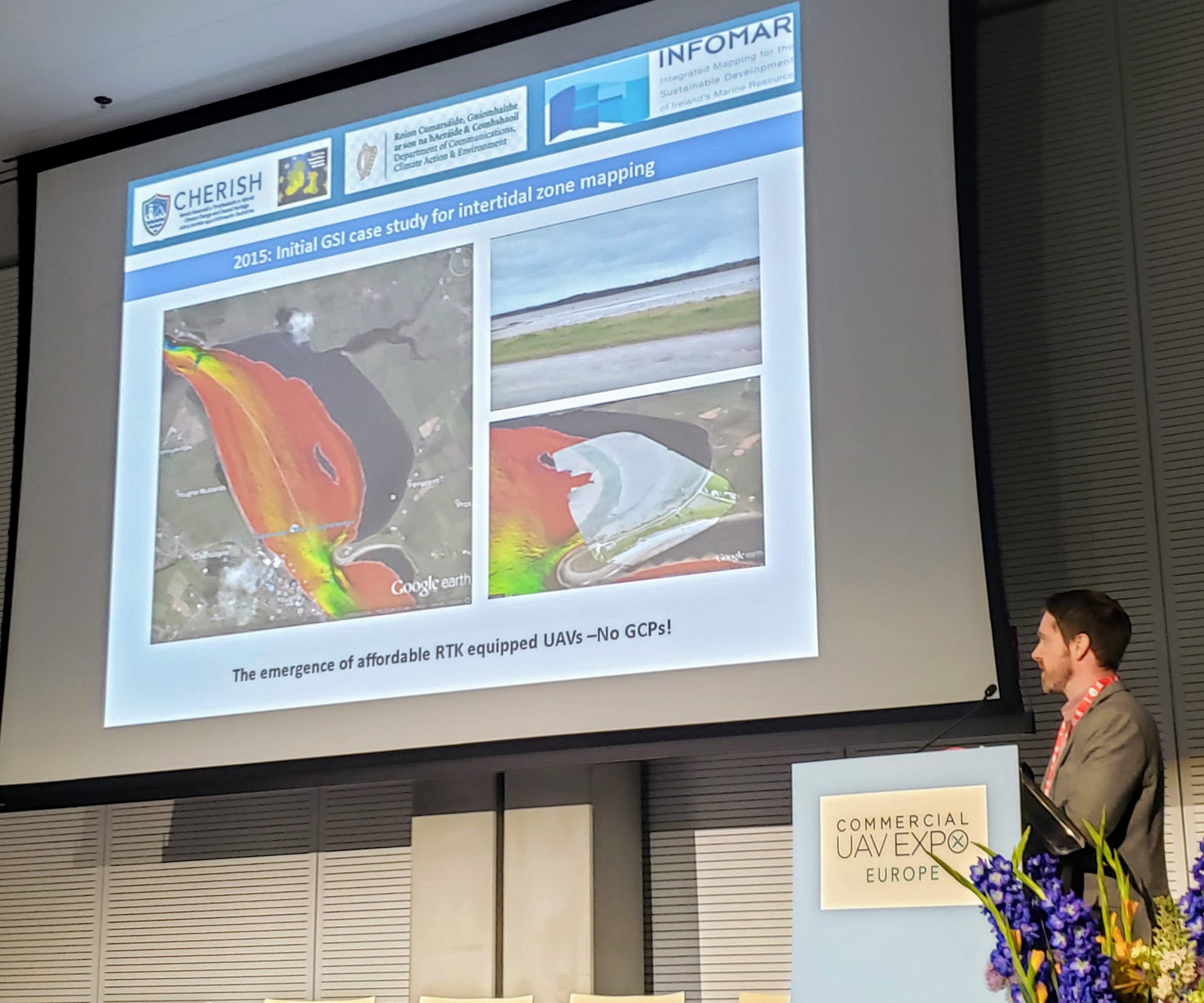 When deploying UAS on larger mapping projects, the characteristics of the data that is being collected as well as how all of that data is being treated are essential to consider. Numerous companies are already utilizing drones to make a real difference with an eye on how those applications will scale across their organizations, and they’ll have a distinct advantage as the technology advances. However, will scalability challenges persist even when such issues are actively considered?While fit-for-purpose acquisition routines are always going to have a unique cost, in an industry where some have a perception that lower equipment costs automatically lead to lower project costs, it’s even more important that project costs outside of data acquisition are accurately considered. Drone technology can only scale when costs are both defined and understood, and those costs are less and less about the price of the drone. The people who understand that have proven how that understanding can turn into definable results and success.