One of the hottest topics during the recent Commercial UAV Expo was centered on drones operating beyond visual line of sight (BVLOS) and the inevitable integration of manned and unmanned aerial vehicles through controlled airspace. Earl Lawrence of the Federal Aviation Administration (FAA) addressed the topic on the first day of the event, and later presenters touched on the subject during numerous sessions and discussion panels.

One company doing something to directly enable these kinds of operations on the hardware/software front is Sunhillo, a global leader in surveillance data distribution and conversion products.  Headquartered in West Berlin, NJ, within 45 minutes of the FAA William J. Hughes Technical Center (WJHTC), Sunhillo handles all life-cycle aspects of aircraft surveillance data distribution systems for the FAA, US Military, civil aviation authorities, and national defense organizations across the globe.We had the opportunity to connect with Doug Walczak, Senior Analyst, Business Development at Suhillo’s booth on the exhibitor’s floor for a comprehensive examination of their products and services.“Sunhillo has been participating in UAS operations for over five years and is a key innovator involved with the UAS initiative," Doug told Commercial UAV News. "We’re one of the original members of the Mid Atlantic Aviation Partnership (MAAP) led by Virginia Tech, an FAA UAS Test Site performing live operational testing supporting the FAA and NASA."When pressed about the specifics of how Sunhillo’s experience with manned aviation and the relationship with the FAA have helped the company enter the UAV arena, Doug went deep into the technical details of their approach. 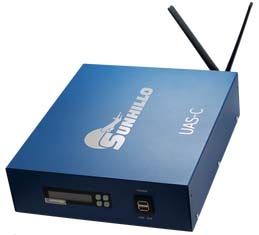 “The Sunhillo UAS-Connector (UAS-C), patent pending, is the critical piece for a seamless integration solution of UAV’s into the National Airspace or NAS," he explained. "The UAS-C Solution is based upon deployed FAA technology which carries the same critical security levels needed to fly in controlled airspace or BVLOS. The UAS-C is designed to connect directly to a UAS Ground Control Station (GCS) to obtain the positional data used for Tracking, Voice Communications and Situational Awareness.”The UAS-C addresses the three major challenges associated with flying UAS in the NAS:“Everyone in the industry seems to be concerned with flights below 400 ft," Doug contnued. "At Sunhillo we want to begin creating solutions for what happens above 400 ft in preparations for the regulations to allow flights BVLOS and ensure a communications’ environment that would guarantee safety and reliability.”With companies like Sunhillo already creating redundant technology for the safe integration of manned and unmanned aircraft in controlled airspace, we're that much closer to making BVLOS drone operations a daily reality.

What Needs to Happen for Humanity to See and Benefit from UAVs and Air Taxis?

What Needs to Happen for Humanity to See and Benefit from UAVs and Air Taxis?

Exploring the Collaboration Between NASA, the FAA and Drone Industry to Develop a Cloud-Based UTM System