Witnessing the Maturity of Surveying and Mapping at Commercial UAV Expo

The drone industry as a whole has moved beyond the excitement associated with the fact that photographs captured correctly via drones can be turned into various ‘mapping’ based deliverables such as ortho’s and point clouds. UAV-based mapping service providers now have a better understanding of what their clients want to receive from them, and those service providers also have a better sense of what it means to capture and process this information in a sensible manner.

That's been an ongoing development for some time now, but what was new at the Commercial UAV Expo was how far beyond this baseline the industry as a whole has matured. UAV technologists who for so long have sought the simplest (i.e. cheapest) solution are now more receptive to learning from tried and tested professional workflows that have gone before the widespread use of the UAV. It's a welcome development and something that speaks to the overall maturity of the technology which was also on full display at the event.

With sessions that turned into roundtable discussions led by speakers and involving attendees, the layout and format of this year’s Commercial UAV Expo America’s event made it easy to strike up a conversation with anyone and everyone in the room. Admittedly, one of these conversations lead me to realize how far we have to go when it comes to the overall maturity of the industry, since I'm pretty sure the person who told me they were considering utilizing beyond-line-of-sight and swarm applications for a 31,000-acre project didn't understand the technical or legal ramifications of what they were suggesting. Still, it underscored the genuine desire to innovate with drones, regardless of project context, and it's the sort of thing that can only help make such capabilities that much more feasible.That excitement and passion could be seen in multiple areas, especially when it comes to autonomy. As an industry, we are of course tending towards increased autonomy, but drones aren't always going to be a fit to see such capabilities applied. Thankfully, what was evident was that people have finally recognized this fact, and aren't talking about drones as a silver-bullet solution. There were numerous conversations about the variety of approaches and tools that can increase the efficiency of professional UAV operations. Discussions are now being consolidated around tried-and-tested workflows and best practices, and the fact that people are ready and willing to talk about such details further speaks to how this enthusiasm for the technology is being driven in the right direction.

The Product Preview session opened the pre-conference day, which saw numerous tools and solutions showcased in quick but informative fashion. We saw presentations from long-established manned airborne survey vendors, Trimble and Phase One, that both reminded and introduced us to UAV versions of technologies that have enabled efficiencies for manned survey operations for years now.Trimble (Applanix) described what constitutes Direct Georeferencing (DG) for drones. Whether or not it was new to attendees, the concept is behind Trimble products that 90% of manned airborne survey operators have been using to georeferenced cameras and lidar systems over the past couple of decades. Their incarnation of inertial navigation system (INS) products for the UAV industry is the miniaturized APX product line. Efficiency implications were described in terms of DG versus the aerial triangulation (AT) -type methods that are still employed by most UAV survey practitioners 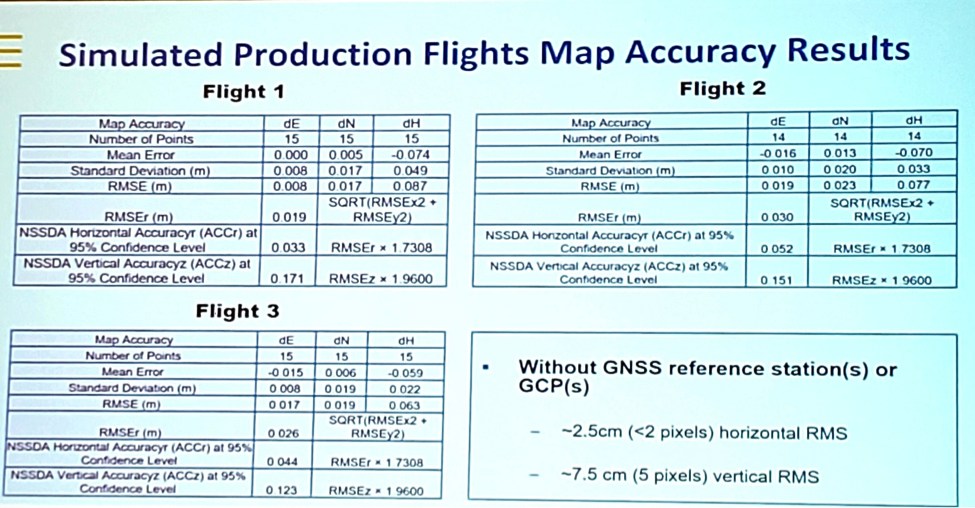 DG efficiencies highlighted included permitting 40% versus 80% lateral overlaps in UAV camera flight lines. Together with outlining the results of a test project, they proved that survey-grade (i.e. 2.5cm/1-inch accuracy) data can be collected with a UAV using no ground control points.Phase One Industrial reminded us of why this new generation of medium-format digital cameras are proving to be so popular with manned operators. It's all about their form and function. Being able to capture imagery at a higher resolution from a higher altitude by using cameras that are smaller in size brings a whole host of operational efficiencies. That includes optimized flight planning and the ability to operate from smaller (cheaper) aircraft. These cameras are now so small that they can be mounted on a UAV, a benefit that is now even easier to take advantage of with the release of new models such as the iXM100 that have been designed specifically for UAV use.In a case study that compared a mapping project using the iXM100 with a popular DJI camera, it was shown that the same resolution could be achieved at 300ft as opposed to 100ft (thus overcoming terrain issues) and led to a 4-minute capture time compared to 27 minutes. That difference speaks to the maturity of the technology that is built on what was achieved with it when it was strictly utilized in manned aircraft.

Best practice: produce only what the customer wants 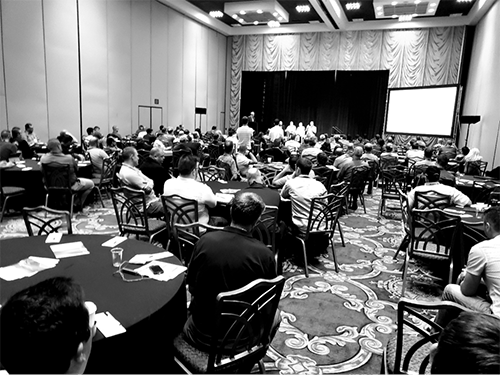 During the Surveying and Mapping panel sessions, we didn't focus on what the best drone, camera or software is to use. Instead, multiple industry veterans discussed and explored best practices around understanding differences between accuracy terminologies, and also and how these relate to different applications. They also discussed how to best communicate results not only with end-users but also within a wider project delivery team.One observation came from the panel from Michael Singer of DroneView Technologies. He talked about how often UAV practitioners are guilty of trying to return to a client the entire data stack including raw point clouds and images. He explained that client s rarely have either the interest or capability to handle such data. Instead, the planning stage of a project needs to be focused on the specific client information deliverables. Operators can then work backward through necessary processing steps and data collection strategies. It's a process that wasn't being discussed or talked about in years past and illustrates just how mature the technology and users have become.To learn more about some of the specific discussions and takeaways from the sessions, see what Juan Plaza had to say about the Autonomy track.

These developments certainly indicate that we've come a long way, but the desire to utilize drones on a 31,000-acre projects is clearly still out there. What does that tell us about how far the industry still had to go?Rather than continually pushing potential opportunities brought by changes in regulation, miniaturization or technology, these kinds of desires tell us that the need to guide drone operators and advocates in the right direction still exists. I'm not sure how or if drones are going to be utilized on projects at certain scales, but people that have such ideas in their heads are more open than ever to moving away from such notions to investing in tried and tested workflows such as those developed from the manned community. More of those conversations than ever took place at Commercial UAV Expo and seeing people focus on the information that a client is looking to use rather than how a drone is going to capture it is a positive development. It speaks to the necessary maturity of the industry and technology that will lead to bigger and better things for both.

How Will Drone Mapping Impact the LiDAR Market?