When it comes to monitoring the progress of large-scale construction projects, completing routine inspections or spotting safety hazards in various industries, drones can provide a valuable service â€” collecting visual data without putting workers in the field. Of course, for that data to be of use, it needs to be easily accessible, incredibly accurate and available almost immediately.

Those are the principles that Eye-bot Aerial Solutions, puts first when approaching every new project. The Pennsylvania-based company specializes in using UAV to observe and collect data on-site, providing clients with real-world digital context in the form of a 3D reality mesh or 2D mapping of their assets."In a nutshell, we set out to provide owners or project managers with accurate digital representations of the state and position of their assets," Eye-bot Founder and President Jake Lydick told Commercial UAV News.The company recently earned a 2018 special recognition award from Bentley Systems at its annual Year in Infrastructure Conference for its ongoing work with Shell Chemical Appalachia and the construction of a multi-billion dollar, world-scale ethane cracking plant to create polyethylene in western Pennsylvania. 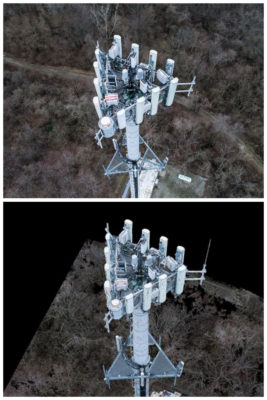 These photos show the accuracy of Eye-bot's 3D modeling. Pictured is an aerial photo and 3D model of a telecommunications array.

To help monitor and manage the construction of the facility, Eye-bot data collectors use UAV to capture real-time, accurate data of the entire site and the surrounding areas, close to 450 acres total and processed the data into a high-resolution orthophoto and 3D reality mesh model to be reviewed by those managing the construction project.On a weekly basis, the project team captured more than 8,000 images and processed the images as 2D and 3D deliverables within the required 72-hour window using Bentleyâ€™s ContextCapture software.Lydick estimated that they've completed about 50 meshes of the site in the roughly 18 months they've worked the project."We're able to [complete a capture of the site] once a week," said Lydick, noting that flight time is obviously limited due to the inability to fly over workers on-site.On-site data collection takes 3-4 hours and the data is typically turned around for the client within 48 hours, said Lydick."It has to be [fast] to retain its value," he said. "Every day between data collection and deliver, the value is diminished."The high-speed processing engines of ContextCapture produced a dimensionally accurate 3D reality mesh, enabling the identification and resolution of potential construction problems before they impact operations on site. The 3D reality mesh models are expected to facilitate inventory visualization and improve emergency response management.In one instance, a part of the site on a hill above the railroad tracks started to erode and fall onto the tracks. Using the historical model, the management team was able to isolate what was causing the erosion (unexpected water runoff from a new phase of the project), and they were able to resolve the problem and mitigate the risk.In another case, an electrical line had been put in very close to the hillside â€” engineers were able to monitor erosion from one model to the next after a series of storms and take appropriate action before it became a hazard to the site.The project is expected to run through 2021. 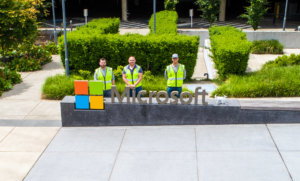 Eye-bot employees at the Microsoft Corporate Campus in Redmond, Wash.

Eye-bot also recently wrapped up the full-site capture of the 600-plus acre Microsoft Corporate Campus located in Redmond, Wash."This capture was completed over a 2 day period and required 10 different takeoff/landing zones in order to maintain line of sight and RC signal throughout the busy campus," wrote the company in an update.While its biggest projects have involved construction, Eye-bot provides services for other industries as well â€” oil and gas, telecommunications, insurance, and infrastructure, among others.In the short-term, the company is looking to enrich the data it collects and expand on what they already do well. Lydick is focused on constantly collecting feedback from his clients, including on-the-ground workers whose work are affected.Occasionally there are employees that see Eye-bot drones as Big Brother or that the company is "trying to catch them smoking," said Lydick, but that overall the response has been largely positive across projects.The company is beginning to take their fine-tuned data processing service and offer it to outside data collectors as well, as long as those capture methods are up to Eye-bot standards."What we're really starting to find is there are a lot of companies out there that jumped right into drones, but they were only doing the flying," said Jim Yanosick, Eye-bot's business development manager. "People are a little lost with what to do with the data once they collect it."What Eye-bot has been able to do is work with drone service providers and process their captures through the ContextCapture system.While Eye-bot certainly has a lot going on in the U.S., they've set their sights high."We want to be apart of that global picture," said Lydick.Â Â Â