We’ve been hearing about organ deliveries that have been enabled by drones as well as beyond visual line of sight (BVLOS) flights for years now, all of which have been accomplished despite the power bottleneck that has limited the technology for even longer. Now that the era of unmanned airlines has truly arrived, isn’t it time we revise the thorny issue of entended flight time for drones?

Even after many years of development and steady improvements, the battery industry is only delivering around 25 minutes of flight time for regular multi-copters. The ratio of weight to power is still dismal in comparison to fossil fuels and cannot ever hope to replace it at this level. The situation with current battery chemistry limitations is so dire that the European community is forming a task force and investing millions in trying to come up with new ideas and new solutions to the problem.Thankfully, when it comes to extend flying times and increase time in the air (TiTA), we have already identified two technologies that could be the key to opening up countless opportunities for drone technology.Ballard Unmanned Systems, a subsidiary of Ballard Power Systems, has been focused on the development and manufacturing of Hydrogen Fuel Cells for the UAV market. Over the past year, they have been working not only on in-house R&D but in creating alliances and partnership that will allow the community to create the necessary ecosystem to bring this power source from the fringes into mainstream usage.We reached out to Phil Robinson, General Manager of Ballard Unmanned Systems to discuss the latest announcements from his company, the most recent of which centered on turnkey fuel cell solutions for UAVs.“These are exciting times!” Phil said enthusiastically, “We have signed milestone agreements in the past few weeks that allow Ballard to truly field our hydrogen fuel cell technology in a commercial environment. These systems, proven in defense environments, now can deliver extended flying times to commercial operators in a way that’s simple, safe, and straightforward for their operations teams.”“We’re also pulling together everything an operator or aircraft OEM needs to run evaluation missions under hydrogen power, under the FCair™ brand,” he continued. The idea is that all the pieces work together simply and natively, so the user doesn’t need to be a hydrogen expert to integrate and fly.”So what’s FCair™?“The FCair™ family is a complete solution that includes an industry-leading hydrogen fuel cell power system, hydrogen storage vessels, pressure regulators, refueling solutions and hydrogen gas supply. The product line supports commercial UAV manufacturers and operators in the delivery of fuel cell-powered UAV benefits, including 3x the flight duration of batteries, 5x the reliability and a fraction of the noise of small internal combustion engines, and significantly reduced operational expenses.”The family includes the FCair™-600 and FCair™-1200 fuel cell power systems, which delivery 600W and 1.2KW of power, respectively. To store the hydrogen on the aircraft, the family also includes Carbon Overwrapped Pressure Vessels (COPVs) in several sizes. The most common, a 4.7-liter tank, holds enough hydrogen to run the 1.2KW system for between 60 and 90 minutes. A smaller tank is more appropriate for 600W fixed-wing systems, which typically require less power. A large 7 liter COPV is appropriate for larger systems with long run times. 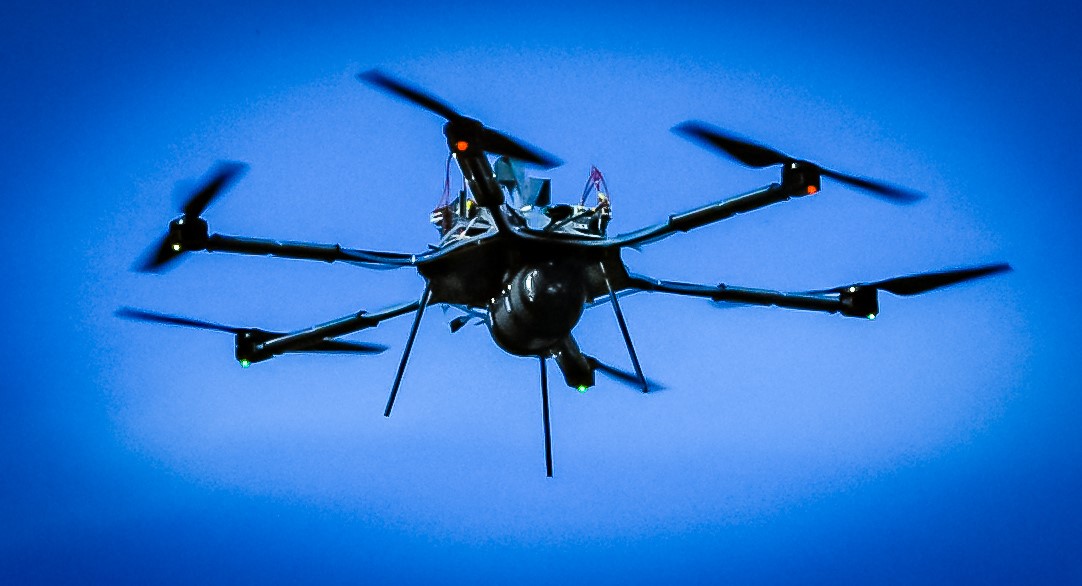 Because the COPV stores the hydrogen at high pressure (up to 6000 psi), a regulator is needed to reduce this to the 20 psi used by the fuel cell. Until recently this meant a big, heavy piece of equipment. Thankfully, Ballard has formed a partnership to develop a very small and lightweight regulator designed to mate directly to the COPV and to the fuel cell. The FCair™ regulator weighs less than 250 grams but can still enable easy hydrogen filling, monitoring, and connection to the aircraft.Of course, there’s the matter of getting the hydrogen to start with. The Ballard folks have partnered with gas supply companies across North America to provide delivery of hydrogen cylinders to flight locations quickly, safely, and inexpensively.“We have a long history working with hydrogen suppliers and have been able to leverage these relationships to make it easy to field fuel cell drones,” Phil explained. “We can typically arrange for a cylinder and related safety equipment to be in place anywhere we want to fly in a few weeks, freeing the drone operator from all the vagaries of compressed gas delivery contracts and details. We know how to assure that the equipment is installed and used safely and securely, which are big concerns for the gas delivery companies.”Finally, the company has partnered with BFD Systems, a heavy-lift drone design and manufacturing company in Philadelphia, to produce a standard hydrogen reference multi-copter, the H2-6. The copter, with a payload capacity of 2-3 kg and a flight time of 60-90 minutes, is amazingly quiet in flight - at 50’ you can barely hear it – which is nothing like the high-pitched whine of small quad-rotors. It can be adapted to missions that range from infrastructure inspection to scouting for agriculture to package delivery to deployment by first responders.

But apart from hydrogen and the perceived long-term viability of that technology, what else is out there in terms of innovation? How do we address the issue of TiTA when the task involves heavy lifting and long duration?A number of solutions have been proposed but few of them, if any, use electric batteries as the power solution for multi-copters. The reason is simple, as the power to weight ratio of current battery technology does not allow for heavy payloads for extended periods of time. Of all the alternatives to address heavy & lengthy, the one we have selected as the most exciting as of today is a heavy lifting platform being developed by California-based Parallel Flight Technologies.We spoke with Joshua Resnick, CEO and one of three founders of Parallel Flight Technologies. He revealed, for the first time, details about their revolutionary design.“The heavy lifting platform is a radical UAS combining extreme heavy lifting and long duration,” Joshua told Commercial UAV News. “We have worked on a new concept we call Parallel Hybrid technology which gives the platform the capability of lifting its own mass in payload for over 2 hrs. It’s also fully redundant and can continue flying in the event of an engine failure. This platform opens new possibilities for unmanned logistics, search-and-rescue, firefighting, and heavy sensor applications.”Joshua has a background in electrical engineering and for years worked for Tesla, specifically in the electric components of the Semi-Truck project. With that experience and inspired by the need to help California fight voracious wildfires, he and two friends founded Parallel Aerospace in 2018.“What we’re doing is inspired more in the automotive world than in the aviation industry,” he explained. “Our patented hybrid technology connects the internal combustion engine and the electric motors/ generators in a way that has been used before in cars but never in aircraft. Our power modules have redundancy and safety protocols that would allow the UAV to continue flying in case of an engine failure; the electric motor will take over and the power generated by the other power modules will guarantee a safe power supply to permit a safe landing. Additionally, our patent-pending Power Module Technology seamlessly blends the power and duration of combustion engines with the precision control of electric motors. The result is unprecedented efficiency, duration and lift capability.”With emerging technologies such as Ballard and Parallel Flight Technologies, the future of longer flying times for multicopters and the commercial opportunities that will be opened up as a result of these capabilities is closer than ever.

Parallel Flight Technology Has Lift Off!