How Can Drones Be Utilized to Support Collision Scene Reconstruction?

Collision reconstruction helps officials uncover how and why a crash occurred, and provides detailed and accurate information for collision analysis, improving traffic safety. The goal is to complete the recordings in a quick and efficient manner that still produces useful information.

“Last year’s study was groundbreaking,” said Basil Yap, manager of NCDOT’s UAS Program Office. “We found that not only does it save thousands of dollars, but using drones instead of traditional ground-based reconstruction techniques also cuts the time each reconstruction takes from almost two hours to less than half an hour.” 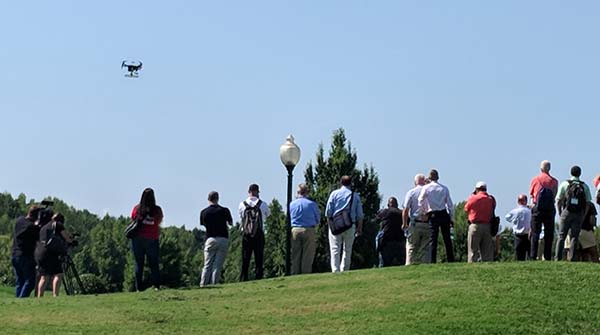 In a more recent report, RTI International collaborated with the University of North Carolina at Charlotte, with the support of NCDOT and NCSHP, to see if it was possible to use drones for low-light collision scene reconstruction, and, if so, how much and what type of lighting needs to be brought to a scene. Because about half of fatal accidents occur at night, integrating UAS into the collision scene reconstruction reduces the total amount of time that lanes are closed, potentially saving nearly $424 million a year in congestion costs. Some of these insights were discussed in-depth at the recent North Carolina Drone Summit and Flight Expo, but all of the critical information that public safety officials need to know is contained in the report.

“This report will benefit all agencies nationwide as technology companies and researchers can work on fixing the limitations”, said NCDOT UAS program engineer Darshan Divakaran. “So much money gets wasted on duplicating the same testing or research, which made us realize we need to stop reinventing the wheel and start sharing our research with each other. This way we can understand and enjoy the full potential of this technology. Integrating UAS technology within our public safety agencies should be of utmost importance for the safety of our nation.”

Although the study’s results are positive and both teams conclude UAS are more efficient in low-light collision scene reconstruction, “FARO reconstructions are far more accurate than UAS reconstructions and will not be replaced for forensic analysis for off-site reconstructions without significant innovation to UAS data collection systems”, RTI International states.

Moreover, RTI International mentions additional research is needed to improve image quality and to test different lighting solutions. Working with first-responders, like firefighters and city police officers, developing a quantitative method for coding data that reflects the qualitative components of the Data Quality Assessment from this study, and flying simultaneous trials over multiple simulated accidents in the same test field are some of the organization’s considerations for future tests.

“NCDOT Division of Aviation continues to partner with companies, agencies and researchers on UAS research and all our reports are always available to everyone”, Divakaran continued. “We are also proud that NC State Highway Patrol is at the forefront and leading the nation in UAS capabilities particularly in the Collision Scene Reconstruction area.”

How Will Research Accelerate the Integration of Drones into SOPs?