Drone Market Overview and Update from the Commercial UAV Expo

As one of the Keynote presentations at Commercial UAV Expo Americas, attendees listened to a comprehensive analysis of the commercial drone market in 2017 by Mike Blades of Frost & Sullivan and Colin Snow of Skylogic Research LLC. Mike shared the latest on where the commercial drone ecosystem is now along with prospects for the future, while Colin laid out how fast the drone industry will grow, which sectors will grow, which ones will lag, and why. 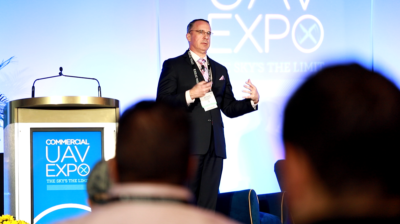 Mike began his presentation calling 2017 “The Year of the Drone” and showed some data that proved that growth in sales and use of drone-related products and services have increased significantly over 2016, marking the beginning of a revenue-generating industry. He saw six clear areas of growth for 2018: Mike also mentioned that there’s been a growing trend towards the commoditization of the drone industry, and that mergers, partnerships and consolidation will continue to increase. He forecasted significant growth for the UAV industry but warned that perhaps the revenue numbers would not live up to the hype. He predicted that, “this will not be a drone market, but an information market”. 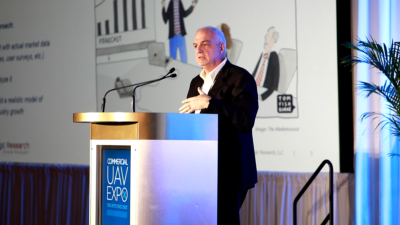 Colin dove straight into the revenue numbers saying that over 70 different research firms throughout the world are now selling Drone Market Analysis Reports at prices that vary from $2,000 to $6,000 per copy of the report. The forecasted market size from these reports fluctuates from $2B to $127B and the methodology to obtain these figures is as diverse as the results of their analysis.Colin emphasized how important it is that Part 107 has lowered the barrier to entry for professionals who want to use drones to impact their business. Under Part 107, more and more players feel safe testing the waters and adding drone to their existing workflows. He also mentioned that his most recent research showed that the majority of drone-based service providers are small companies which are not generating enough revenue to break even. This crude reality is exacerbated by the fact that business adoption of the technology by established enterprises and their willingness to pay fair prices for services is growing very slowly.  Colin was very specific with hard data from his recently conducted survey. He mentioned that 68% of all drone sales are for commercial purposes and of that 42% end up in the photo and film commercial market segment. After photo/film, the largest user segments are surveying & mapping with 11%, asset/infrastructure inspection and monitoring with 7%, public safety & first responders with 5% and agriculture & farming with 5%. 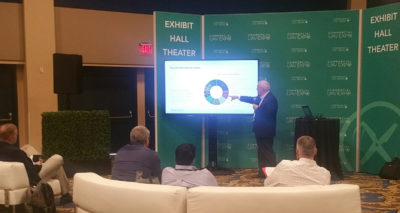 Presenting in the Exhibit Hall Theater

Later in the day, the two were able to connect with attendees in the Exhibit Hall Theater in a more intimate setting to answer questions and further explore many of the talking points from their presentation. At both the Keynote as well as the Exhibit Hall Theater, Mike and Colin were able to give the audience an optimistic but cautious look at the present market situation as well as a brief glimpse at the 2018 reality of our industry.