Is Our Airspace Safe? Why Counter Drone Technology is Necessary

Drone technology is pushing the limits of everything from wildlife photography to home security, giving civilians the ability to explore higher and farther without any license or training. Unmanned aerial vehicles (UAVs) are here to stay, and that means our airspace is changing too. However, along with brand new possibilities come brand new threats. As drones get more accessible and affordable, more amateur and untracked pilots are taking flight. What does this renaissance mean for manned aircraft, commercial and military drones, and even people and property on the ground?

Drone-related dangers range from aircraft collisions and communications interference to illegal surveillance and trafficking. It's no surprise that a new need is emerging in the UAV community: counter-drone technology. If you have a use for drones, you may have a use for counter-drone devices too. 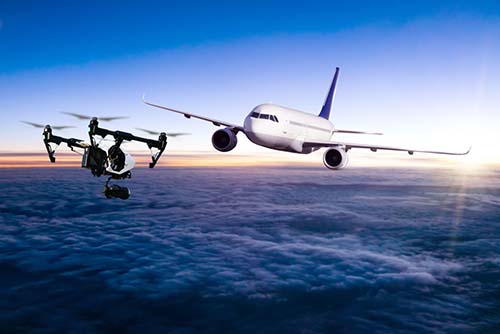 Danger in the Skies: Airplane and Helicopter Encounters with Drones

So, what risks do unmanned aircraft actually pose to manned aircraft? So far, the danger is palpable enough that it’s a top priority for the Federal Aviation Administration (FAA). The agency maintains a drone registry, offers a free app to locate safe and legal fly zones, and even supplements its law enforcement efforts with education initiatives to teach drone safety. The goal: to prevent people from operating drones around aircraft.

The FAA knows it’s a problem because they also track all drone encounters and sightings in the airspace, 921 incidents were reported from December 2013 to September 2015 alone, and 327 of them were encounters. Which means drones flew close enough to an airplane or helicopter to present a danger of midair collision, 28 were so close that pilots had to maneuver around the drones to avoid crashing the airplane.

Why are so many drones getting close to manned aircraft? Most incidents happen too high in the air or too close to an airport – in other words, in prohibited airspace where drones are illegal. More than 90 percent of the incidents happened above the maximum altitude for drones (400 feet), and the majority happened within five miles of an airport.

When drones fly too high, they pose obvious risks to manned aircraft. But when they fly too low or too fast, they can pose serious risks for people and property on the ground, too. In 2014, a mistletoe-toting drone’s out-of-control blades clipped a Brooklyn Daily photographer’s face. A year later, a Fox News camera operator was hit by a drone during a drone safety demonstration. 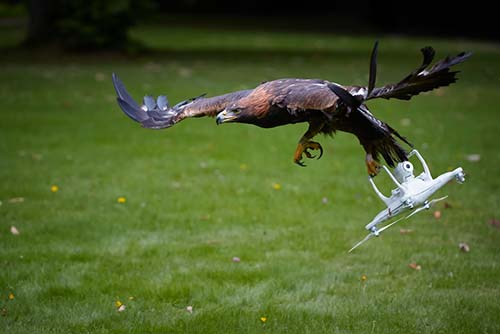 While humans are no matches for incoming drones, animals are a different story. Some birds actually mistake drones for other birds, creating injury risks for the birds and the drones. During one confusing mid-air drone encounter in Massachusetts, a red-tailed hawk snatched a drone from the air and tossed it to the ground as the onboard camera continued filming. An eagle also brought down a drone in Norway, and a chimpanzee used a tree branch to destroy another one in the Netherlands.

Of course, drones also pose threats to buildings and facilities. One man crashed his drone into a Yellowstone hot spring in 2014 and left it there, eventually facing multiple federal charges. In 2017, another man sent his drone into the Seattle Space Needle while workers were preparing a fireworks display. Harmless overhead drones have even caused security crises at professional baseball and football games.

What Can You Do? Today’s Counter-Drone Technology

Today, the risk is clear: drones are showing up where they shouldn't be and doing things they weren't designed to do. Whether these violations are accidental or criminal, they’re causing security and safety risks, and the solution is clear too: counter drone technology. From gun-like weapons that jam communications to malware that quietly hijacks the controls, new counter drone tools continue to emerge, offering better and more aggressive ways to keep out unwanted drones. But which counter drone technology is the most capable?

For now, it’s the shoulder-fired counter drone weapons that offer the most exciting features. If you want to stop an unwanted drone from getting closer, you need to disrupt communication between the drone and its pilot. Today, a few different “guns” and weapons are designed to target flying drones and allow you to do just that. They can even deliver the drone back to you so that you can identify the pilot and keep any incriminating or illegal data in your possession.

For example, the SkyWall 101 fires a net to catch drones from up to 100 meters away, even if they’re moving at high speeds. This portable, 22-pound bazooka has a smart scope that gives feedback and locks onto targets, then calculates the necessary force and distance for the projectile. It even deploys a parachute to return the intercepted drone back to you for analysis.

Meanwhile, the lightweight DroneGun uses a less hands-on approach to stop unwanted drone activity. The 13-pound, rifle-style “gun” actually blasts electromagnetic noise, which jams GPS and radio communication signals and lets you control the drone instead. But first, it uses exclusive acoustic technology to recognize the sounds of nearby drones and compare them to databases, giving it clues about the drone even from more than a mile away.

Of course, counter drone technology isn’t limited to weapons. Cameras, sensors, electric fences, and other existing resources can help too, making it easier to detect or deter trespassing drones. In fact, one British prison uses a whole counter drone system to stop drones from delivering contraband to prisoners. SkyFence, a sophisticated, 2,000-foot drone shield around the prison, uses sensors, electric fencing, and signal disruptors to detect and overtake passing drones. It takes control of them, then safely lands them or returns them to their operators, giving law enforcement a chance to track them.

Drones make flight an achievable dream, and they expand the modern limitations of communication, law enforcement, transportation, national defense, and so much more. But is a more accessible airspace truly safe for manned aircraft and commercial or military drones? What about people and property on the ground? The private and public sectors are investing in counter drone technology for a reason: amateur drone operators continue to make destructive and illegal mistakes, and criminals continue to take advantage of drone technology too. Counter drone devices continue to offer new ways to reduce these risks, enforce existing laws, and protect the airspace.

Providing Airspace Awareness in Austin, Texas: WhiteFox Teams up with ATCEMS at the Circuit of the Americas Formula 1 Race

Howard A. Raphaelson founded what is now known as Raphaelson & Levine Law Firm, P.C. in 1992 after graduating from the Benjamin N. Cardozo School of Law, determined to ensure that every personal injury victim and their family is treated with excellent personal service, respect, dignity and every resource available in the legal industry. Contact us https://www.raphaelsonlaw.com/contact/

Providing Airspace Awareness in Austin, Texas: WhiteFox Teams up with ATCEMS at the Circuit of the Americas Formula 1 Race