Having won the 2018 Red Dot Product Design Award with the AtlasPro UAV, Atlas Dynamics has already proven to know how to manufacture cost-effective technology for a variety of industries, including inspection, emergency response, security and agriculture. During AUVSI Xponential 2019, the company launched new autonomous and multi-UAV capabilities to provide the U.S. military, security and first responder operations “with valuable data, quickly and safely, through advanced, highly robust and easy-to-use products”. 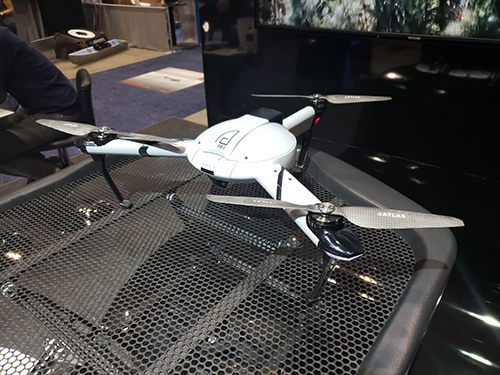 Although the AtlasPro can fly for 50 minutes, which is quite a long time for a drone, planning an automated mission always means at least one person has to keep an eye on the drone to swap the batteries when it returns. This isn’t ideal, especially if you’re using the drone for perimeter security, for example. In the past, we’ve seen how solutions such as the Airobotics’ one have changed the workflow in Mining, Construction and Industrial applications. Similarly, Atlas Dynamics created the AtlasNEST for “perimeter security and first response for sensitive facilities, providing their command and control with accurate real-time data without risking human operators, enabling them to make decisions in real time”.Designed for 24/7, fully autonomous, behind visional line of sights (BVLOS) operation in perimeter security and first response for sensitive facilities, the AtlasNEST is a smart protective and charging station that allows for autonomous takeoff, landing, as well as battery charging and swapping for the AtlasPro, enabling UAV relaunch in less than 3 minutes. Additionally, it withstands extreme conditions between -20C to +50C and integrates with legacy security systems, allowing users to control UAVs from distanced command and control stations.“The drone itself has been a limiting factor,” Omri Cherni, co-founder and COO of Atlas Dynamics, told Commercial UAV News. “So many of the autonomous drone solutions that are out there are big and expensive, to the point that you basically need a crane to perform maintenance on them or just to move them. Not only is AtlasNEST portable and affordable, but it was designed to be a part of an established system or workflow. Technology ultimately has to make sense for the bottom line, and the human-centered design that’s evident in AtlasNEST speaks to what it means for the product to become part of a workflow in multiple ways."&feature=youtu.beIn addition to the NEST, Atlas also launched the AtlasMESH Multi-UAV Communication System. Paired with the company’s semi/fully autonomous AtlasOS, AtlasMESH allows users to operate several UAVs in tandem, while each UAV communicates with the rest of the swarm. Moreover, the MESH system can multi-stream drone data to multiple GCSs to enable collaboration between different stakeholders. Furthermore, the system can make an AtlasPro UAV or AtlasNest to work as a relay station to enhance their range and provide HD stream from more than 15km BVLOS.