The Art and Science of Modern Drone Design

For over a hundred years now, men and women have been designing flying machines of all kinds. Beautiful machines, ugly machines, odd contraptions and crazy ideas alike have taken to the sky after emerging from the design table to enter a prototype stage. All of them have a story, but only some have been able to achieve commercial success.

These ideas and contraptions were based on science, but pure instinct fueled many of them. At the beginning and just after the successful flight of the Wright Brothers in 1903, people all over the world were experimenting with different approaches to defying gravity by achieving heavier-than-air flight.With trial and errors and many lives came the basic design of a single wing, mounted on a fuselage. While it was sometimes above (Cessna) and sometimes below (Piper, Cirrus), a propeller at the front and empennage at the back also emerged.

The fact that this design has not changed a lot over the last century is an indication of just how successful and revolutionary it was. Yes, we have more powerful engines and definitely better avionics, but the basics of aircraft design has not changed much in four generations.The aerial innovations of today owe everything to this era of aviation, but this new cohort of designers are approaching the creation of such things from a very different place. This new generation of creators, inventors, engineers and designers are entering aerospace, not through the grueling world of Aerospace Corporate America; No! These guys are inventing and designing unmanned aerial vehicles in their basements and garages.These people who were born in the era of the computer and don’t know life without the Internet are playing with completely original concepts that may not have been influenced by formal training of that bygone era. Instead, they're often influenced and inspired by something like a fantastical video game, or by a technical innovation that has nothing to do with aviation. Perhaps this is why their imaginations often run wild and focus on the possibilities of their work over anything and everything else. But when this spirit is combined with the insights and expereince that is inherently tied to the origins and science of aviation, look out.One great example is of this innovation running wild is from Jonathan Hesselbarth, founder of Wingcopter, who is on a quest to conquer the difficult challenge of vertical to horizontal flight transition. His solution is so simple that it defies logic itself, but it works. 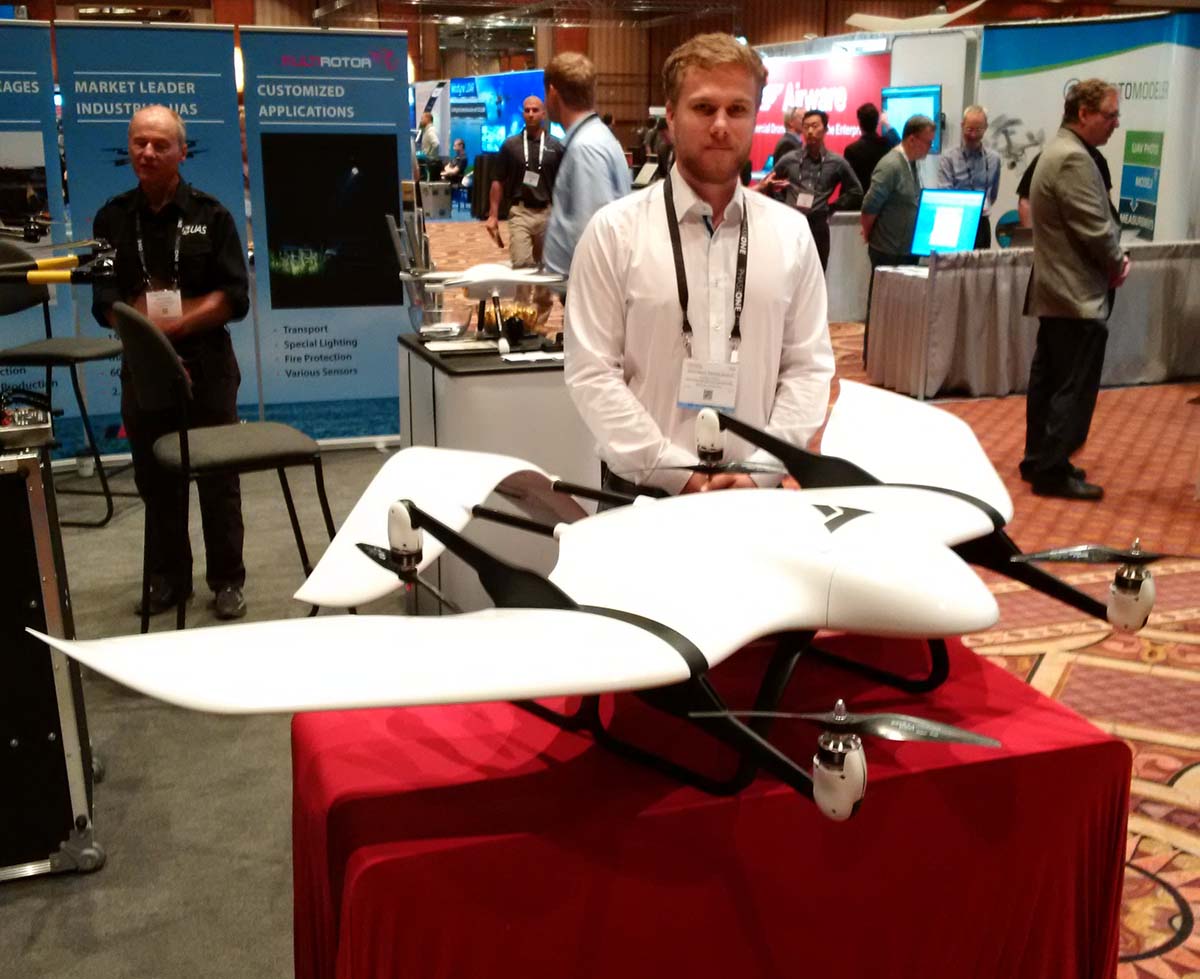 What Jonathan and his team in Germany were trying to avoid was the issue the Bell Boeing V-22 Osprey suffers from, in which two large propellers mounted in a helicopter configuration tilt forward after takeoff to become huge forward-looking propellers. The Osprey was designed and built by Boeing in the late 80’s to provide the Marines with a transport/utility vehicle and since then has had a mixed bag of uncertain successes and a lot of accidents. 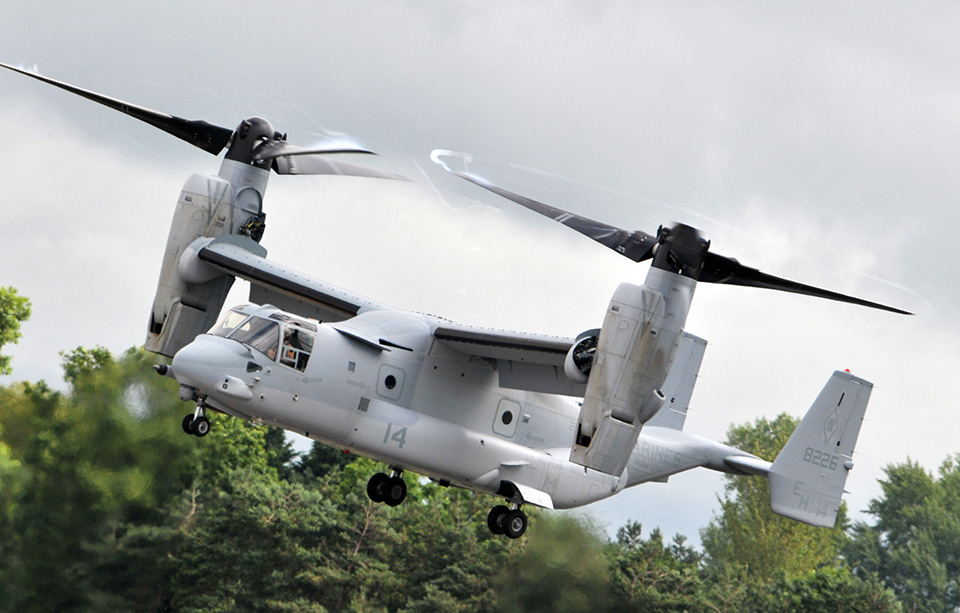 The problem with the Osprey is that the prop wash in the helicopter mode is covering the entire wing area and a small portion of the fuselage, robbing the design of lift capability. As soon as the rotors begin to tilt forward in flight, the prop-wash over the wings begins to generate lift, which makes the Osprey almost uncontrollable unless it’s handled by a complex autopilot and lots and lots of complicated and maintenance-heavy devices and contraptions.Jonathan’s idea, called Wingcopter, like his company, was to divide the power plant into four rotors and to move them forward and aft of the wing to avoid prop wash during the transition. It’s a simple solution but it works like a charm due to the fact that the wings never generate lift during the transition, except from air generated by movement, not the rotors.

Another great example is Spencer Gore and his recently launched Flying Battery concept. Spencer and his team at Impossible Aerospace came up with the idea to stop fighting the weight/power ratio of commonly available UAVs and think out of the box. The result is an elegant and highly efficient drone capable of flying over two hours. 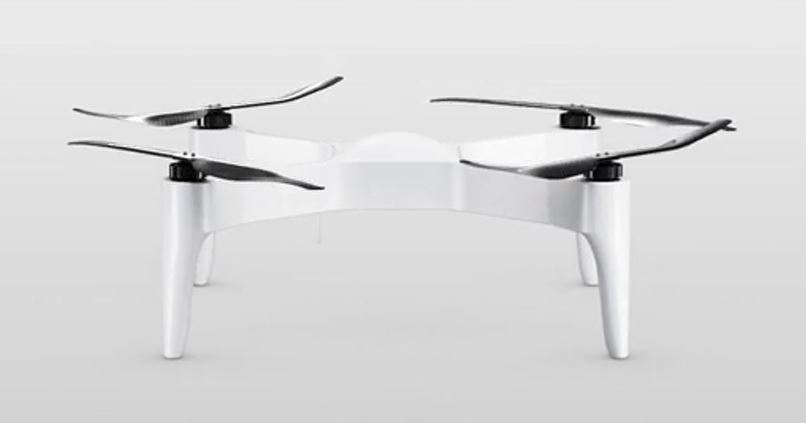 With the advent of new players and innovative ways to create and try revolutionary ideas, it was just a matter of time before a new industry would be created to serve this community.Enter Airshaper, based in Antwerpen, Belgium. They're the creators of a virtual wind tunnel that allows UAV designers to submit their CAD prototypes for aerodynamic analysis. AirShaper has helped companies such as Sensefly increase their flying time by optimizing its designs. They've also helped H-Aero, a revolutionary new design of a Blimp-drone, with the final design of their product.“I founded AirShaper, as I thought much of the work in designing UAV’s, and any other machine that has to travel through air or water, could be automated," said Wouter Remmerie, CEO and founder of Airshaper. "The essence of AirShaper is that we remove all barriers to analyze & optimize aerodynamics, beginning with cost. It's cloud-based, so you just pay per simulation. No expensive software (30-60k€) or hardware (server farms).”“Our users don’t need any experience and there’s no need to have a background in simulation software; our algorithms takes care of this automatically," Wouter continued. “Everything is done in the cloud and at a high speed, so our customers can have results within hours or days depending on the accuracy.”Each report produced by AirShaper on a new design includes four major components:All four components of design are key to an optimal flying machine.In the performance analysis the emphasis lies on the effectiveness of the design with respect to the interaction of drag and lift and how these forces affect the design in terms of best use of the mechanical forces moving the object forward.

In the drag analysis, the emphasis is on the forces acting against the power plant which moves the aircraft forward. The analysis focuses on underpressure zones, surface pressure, surface pressure drag and surface friction.The underpressure zones are areas with a pressure lower than that of the local surrounding air. Often these zones are caused by abrupt changes in shape, most pronounced at abrupt changes in cross-section or surface geometry. If the analysis shows any such areas, the recommendation is to smooth these out to lower drag.The following images provide insight into which features of your object are causing drag by showing “clouds” of low pressure; the darker the cloud, the more significant the cause of drag. 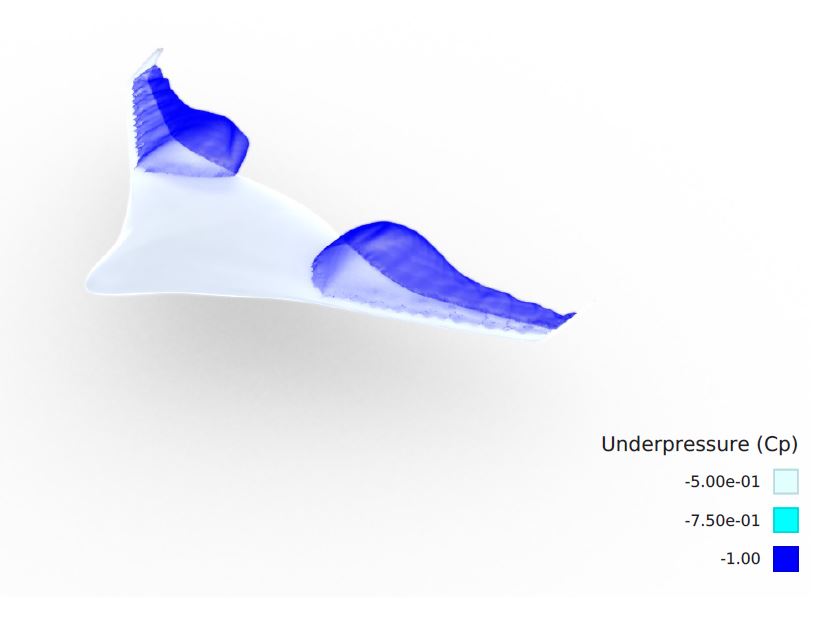 In the flow analysis, the key is understanding the way the wind flows past the shape in order to optimize the design. The virtual wind tunnel provides colored streamlines as the air flows over the aircraft and these can provide multiple insights.First of all, it allows spotting laminar flow zones (steady streamlines) and turbulent zones (swirling streamlines). The transition from laminar to turbulent often occurs when the airflow is unable to follow the surface of the object because the “negative angle” of the surface is too large or because of a geometrical disturbance in the surface. This is called separation which, in most cases, increases drag. 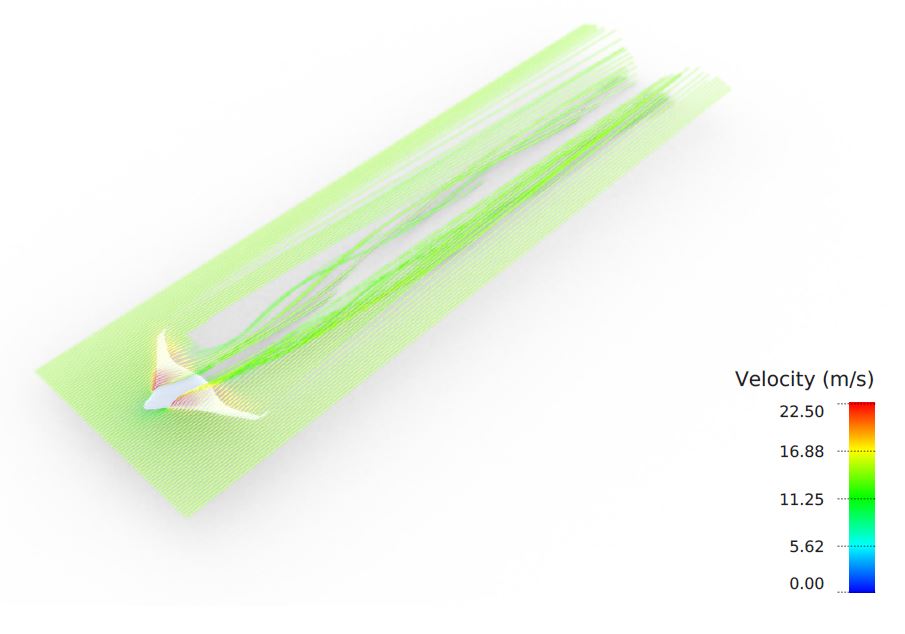 In the last but equally crucial item, the Noise Analysis, AirShaper focuses on reducing the noise generation in the design by looking for the origin of these “noise clouds”. Typically, noise is generated slightly downstream of the location where the flow is disturbed and the solution is simple: smoothen the source in order to reduce noise generation. This eliminates or avoids cavities and external parts. 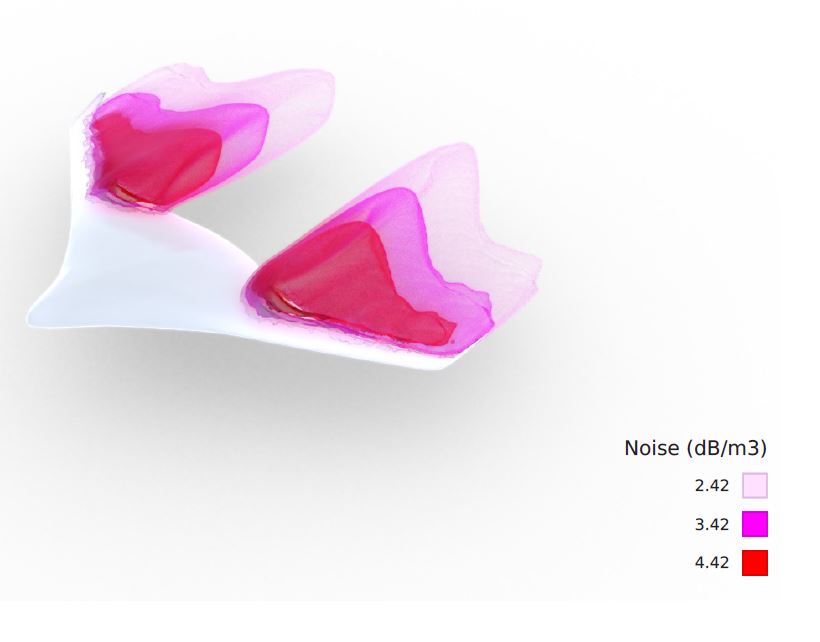 To review the full copy of the sample drone report, please download it from the Airshaper site.In short, the new generation of designers now has been joined by an enthusiastic group of professionals providing tools to optimize the analysis and improvement of their ideas. Doing so is accelerating the pace at which these vehicles will hit the real-life test fields.Granted, all these ideas and designs are yet to be proven effective and commercially viable, but the fact that there’s a new generation of designers and engineers willing to try new concepts gives us hope that perhaps in a few years we will see aircraft that look entirely different than a World War I single-engine plane.We can’t wait to be surprised.