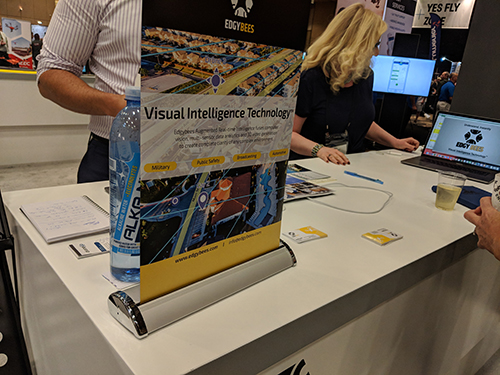 Talk about why we need to focus more on the data drones are gathering rather than the drones themselves is becoming pervasive, and all it is being driven by the need to see this technology create answers for a given issue or workflow. Drones can gather vast and detailed amounts of information, but that information needs to be able to influence how decisions are made in the short and long term. It’s a process that has been challenging for many, and is one of the reasons that the Augmented Real-time Intelligence™ solution from Edgybees caught our attention.There’s a wide range of software products that are designed to process drone data and turn it into an answer for users of all types, but none of them have been able to fuse computer vision, multi-sensor data analytics and 3D video generation in such a powerful way. The Edgybees solution provides users with a simple visual layer of highly accurate, real-time information that allows them to assess and understand what’s happening in the most complex operational environments imaginable.“The situational awareness it creates is something users instantly recognize and get exicited about,” Iris Aluf-Medina from Edgybees told Commercial UAV News. “They can share or automatically send information that creates a much deeper level of understanding, and that’s made a difference in countless emergency and commercial situations.”Founded in 2016, California-based Edgybees wants to enhance public safety, automotive, military, and broadcasting applications by creating virtual worlds on top of any real-world scene. Originally developed for a UAV racing game released in partnership with DJI, the company’s Augmented Real-time Intelligence platform allows users of all types to instantly realize and recognize what’s happening in a given environment or situation so that they can take the appropriate action.These developments were the result of a challenge from Romeo Durscher, the director of public safety integration for DJI, to develop a platform for disaster response, Edgybees adapted its gaming platform and had the First Response suite ready by August 2017, when Hurricane Irma hit the US. The suite contains three apps to help the military, fire and police departments, and state and local governments during operations or disasters. The First Response Air Pilot app brings Augmented Reality, map layers, markers and SMS to the drone pilot while the Command and Control allows users to monitor drones, personnel, and other assets. Finally, the Tracker app helps track personnel and assets by integrating them into video streams and maps.Numerous case studies have showcased where and how the technology is making a difference, but the fact that Durscher himself understands and believes in the solution might be an even bigger testament to the power it has.“The Edgybees technology platform has opened up a whole new world of application capabilities and use cases for DJI’s top-of-the-line hardware devices,” Durscher is quoted as saying on the company’s website. “Public safety of all sectors will benefit from the AR capabilities Edgybees is bringing to drones.”By overlaying useful 3D information over the real-world in real-time after the damage Hurricane Irma caused, Edgybees’ software helped those working as first responders with improved situational awareness and allowed many to take the best route through the debris to rescue survivors. This information includes street names, house numbers, locations of distress signals, team members, powerlines, and more.In August 2018, DJI had a webinar about AR & Drones, together with Edgybees and Alachua County. Also, earlier this year, the company raised $5.5 million in a seed funding round, which will help expand and focus on elements beyond public safety.To get a better sense of how their product might work for you, download one of their apps.

What Does It Mean for Public Safety Departments to Successfully Manage Drone Data?