On March 15th the Federal Aviation Administration (FAA) released its aerospace forecast for the fiscal years 2018 to 2038. The report covers all the areas of interest to the federal agency, notably commercial airliners, general aviation and now unmanned systems, as well as all items pertaining to the safety of operations over the national airspace.

The forecast highlights the phenomenal growth in the use of UAVs and provides a great window into the actual number of registered drones, pilot licenses issued to date and the expected growth in each category. In terms of registration of unmanned vehicles, the report states that by the end of May 2017, more than 772,000 owners had already registered with the agency (hobby and commercial combined). The FAA expects commercial, small non-model UAVs to grow from 110,604 in 2017 to 451,800 in 2022, an average annual growth rate of 32.5 percent for the period. By the end of 2017 and since the launch of online registration for commercial users in the 2nd quarter of 2016, more than 110,000 operators have registered their equipment.The FAA’s commercial UAV fleet size forecast makes a few broad assumptions about operating limitations for small UAVs during the next five years based on the constraints of the existing regulations including daytime operations, within visual line of sight, and a single pilot operating only one small UAV at a time. There is a wide range between its high and low estimates of the number of commercial UAVs we'll see over the next five years, and the FAA attributes this unusually large gap to the possibility that regulations might be enacted over the next five years to allow flights BVLOS that would boost purchases and uses for unmanned vehicles. That sort of regulation would be in addition to the waiver process which could also evolve over the next few years based on feedback the FAA itself has provided.Quantifying the specific markets that comprise the commercial use of UAVs, the document states that almost half of operations are on real estate & aerial photography (48%) followed by industrial inspections (28%), agriculture (17%), insurance (4%) and state and local governments (3%). Even though it is not stated clearly, we assume that mapping and surveying are broadly contained in the “aerial photography” category.

On the issue of Part 107 remote pilot licenses (RPCs), the reports states that by December 31st 2017, more than 73,000 had been issued. Over 90% of individuals who took the required aeronautical knowledge exam passed and obtained an RPC.The forecast for the next five years shows an increase from 73,673 in 2017 to 301,000 in 2022.  The average annual growth rate over the 5-year forecast period is 32.4 percent, right in line with the number of expected sales and registrations of new commercial UAVs. 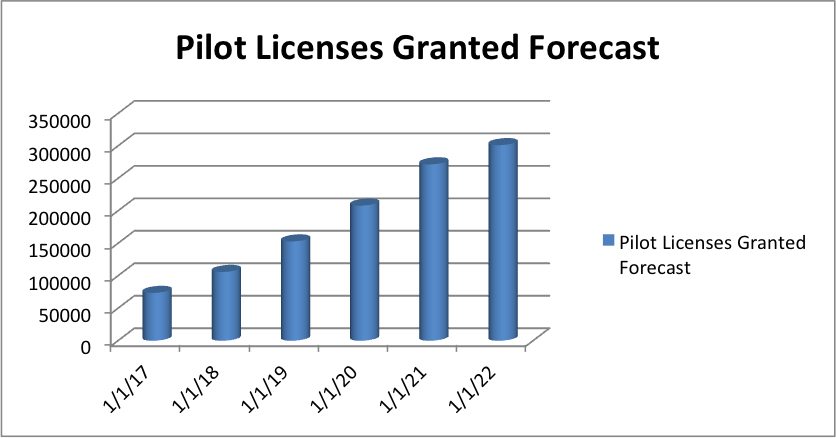 One of the best pieces of news associated with this report is what it confirms rather than what it declares. The fact that commercial unmanned aerial operations form such a critical aspect of this report and appear alongside airlines and general aviation statistics is an admission by the FAA of how accepted drones are in the airspace. That wasn't something many FAA officials wanted to admit all that long ago, and this report demonstrates how accepted the technology has become.This represents a significant sign of maturity for the industry and opens up the door to new regulations allowing, amongst other things, BVLOS operations and an even more efficient sharing of the airspace for manned and unmanned aircraft to ensure everyone in the sky and on the ground remains safe.

Are You Covered? The Impact of Privacy, Nuisance and Trespass Liability on Drone Owners and Operators

Are You Covered? The Impact of Privacy, Nuisance and Trespass Liability on Drone Owners and Operators