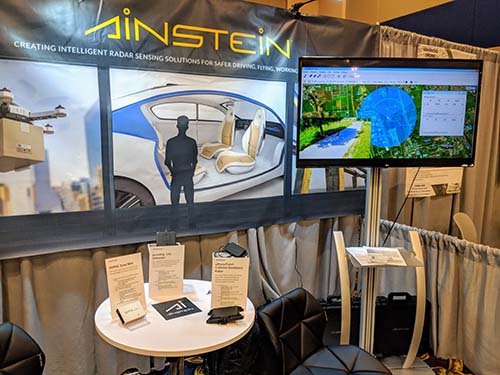 One of the main limitations to a wider deployment of drones remains flight time, or time in the air (TiTA). The weight of the drone itself along with any special sensors or payload it may be carrying have a major impact on on the time drones can stay in the air, and it's why we're always on the lookout for solutions that can increase TiTA.One solution that caught our eye in terms of increasing TiTA at the Commercial UAV Expo in Las Vegas is from Ainstein Radar Systems. The Kansas-based technology company is focused on the development and manufacture of small radar systems for UAVs, and they recently announced two new products in its Ultra Long Range UAV radar series.“We have the advantage to be first-to-market,” said Andrew Boushie, VP of Strategy and Partnerships, during an exclusive interview at the Expo. “Our R&D efforts are directed towards three specific technological areas, Radar Altimeters, Detect & Avoid and Drone Detection from the ground. We can outfit a small drone with one detect and avoid sensor and a radar altimeter weighing just over 100 grams (3.5 Oz). For a more comprehensive solution of 360o detect and avoid coverage and one radar altimeter the weight would be in the 225 to 250 grams’ range.”Recently Ainstein announced the availability of the brand new US-D1, a small but powerful radar altimeter. The US-D1 features a detection range of more than 160 feet and is a must-have for autonomous takeoff and landing in smart city applications, and terrain tracking in Precision Agriculture.“The lighter the drone, the longer it can stay airborne and work on its mission," Boushie told Commercial UAV News as he proudly held the small device in his hand. "The new US-D1 is one of the smallest and lightest drone radar altimeters available today on the market, allowing drone technology integrators and service providers to save on-board space and weight for special sensors and actuators, and avoid reducing their flight time by using heavy equipment.”Other technologies used to precisely calculate the altitude of a flying vehicle, such as laser altimeters, are severely constrained by weather considerations, but radar is not.“More and more UAVs will be used for new applications, and expected to work in extreme operating conditions, including pipeline and tower inspection in conditions of blowing dust or sand," Boushie continued. "Others might include withstanding salty ocean spray during coastal wildlife monitoring or remaining impervious to applications of pesticide or fungicide in precision agriculture applications. Our products are conceived to operate in these extreme conditions, and more, are been designed to meet IP67 standards for dust and moisture protection.”Regarding Ainstein’s ground-based solutions, Boushie was very excited to elaborate on his company’s strategy.“Customizable long-range radar systems are essential to keeping critical infrastructure safe from sky borne threats, which can range from UAVs conducting surveillance of a site to actual attacks on the site,” said Boushie. “Whether accidental or malicious, unauthorized UAVs in proximity to critical infrastructure could have devastating impacts. Ultra long range detection means quicker, more effective responses to threats, as well as enabling safer operations for tasks such as infrastructure inspection, package delivery, disaster response and analytics initiatives. It is a critical component to receiving FAA authorization for such use cases.”If we add Ainstein’s competence in terms of high-precision altitude, detect-and-avoid capabilities and reduced hardware weight, we come up with a complete package that will not only stay in the air longer but will also help define what it means to integrate manned and unmanned aircraft in controlled airspace.