A recent documentary from British Broadcasting Company seemingly puts forth a question in its title — "Britain's Next Air Disaster? Drones" — but goes on to take a stance in the film's opening sequence painting drone technology in a threatening light that could very well go on to damage public perception of the industry.

"With drone technology evolving so fast, governments and the aviation industry are scrambling to understand the potential risks," claims Aldo Kane, an ex-Royal Marine and host of the documentary. "Already the skies above the UK are busier than they've ever been — that is an air disaster that's waiting to happen. It's not if this happens, it's when this happens." 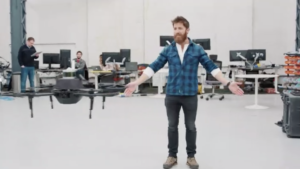 Throughout the title sequence, viewers see Kane describing a drone flying near him in a controlled lab as "terrifying," mixed military footage and a scene where Kane lines up a lone drone in the sights of his rifle.Using the December 2018 incident at Gatwick Airport —  a security officer reported seeing two drones entering the field's airspace, leading to a disruption of airport operations for three days and the stranding of 140,000 passengers — as a jumping off point, the documentary explores a number of different issues facing authorities tasked with combating rogue drones: the potential damage caused by a collision with a manned aircraft, counter-drone technologies and so on.The documentary briefly mentions package delivery, medal supplies delivery and fire response drone activities and has scattered, vague comments about the positives of drones, but was mainly focused on where the technology could go wrong.When the documentary was released on July 1, culture reporters started to review the documentary, lending their thoughts to the general public. The Telegraph called the film "a sobering report on the dark side of drones." "The threat is terrifyingly real," reads the headline of a review from the Guardian. The Lancashire Post called said the film was "a terrifying vision of the future where all the threats to our safety will come buzzing from the skies."Reacting to these lopsided headlines hitting the public, the drone industry responded with a wave of outcry against the BBC and bring attention to flaws in the programming."As the world’s leader in civilian drones and aerial imaging technology, we feel it is our duty on behalf of the millions of responsible drone users around the globe, to express our deep disappointment at the BBC’s negative portrayal of drone technology and one-sided reporting based on hearsay," wrote Barbara Stelzner, corporate communications director for drone manufacturer DJI, in an open letter to the BBC just days after the documentary's airing. " In relation to ‘Britain’s Next Air Disaster? Drones’, only about one minute of an hour-long programme was given to the multitude of benefits that drone technology has to offer society.""We believe this programme failed to meet the BBC’s own editorial guidelines and failed to meet the standards expected of the BBC by viewers of the Horizon programme," wrote Stephen Farmer of Altitude Angel, a UK-based UAV software solution company, in another open letter. "From the start, it clearly seeks to position drone technology as a threat. To clarify, any technology has the potential to be a threat. To vilify this one, which has delivered vaccines to sick children in Vanuatu (work supported by UNICEF), helped the police to find vulnerable missing persons, and might one day play an extremely significant part in helping to transform lives and revolutionise businesses, is anything but impartial."Viewing drones as a safety threatOne of the main points of contention for drone industry stakeholders was the documentary's focus on drone technology as a threat to public safety."The narrative of the documentary was already set in choosing an ex-marine to host the programme," wrote Stelzner. "Throughout the programme this military background was referred to time and time again to establish some kind of justification for his expertise to talk knowledgeably on the matter of drone technology. This clearly framed the issue as a military issue right from the very start." 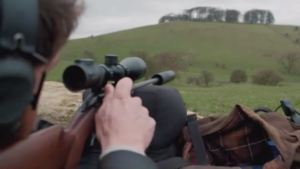 Kane attempts to shoot a drone out of the sky.

Anyone who has used UAVs for commercial applications, or even recreationally, is well aware of advancements in drone technology and the positive effects they can bring to a variety of businesses. But public perception can lag behind, leaving those without direct experiences with drones still living with a belief that they are used for primarily military purposes.Michael Blades, a UAV research consultant with Frost & Sullivan, spoke to Commercial UAV News about how media portrayals of UAVs are keeping the public from recognizing military uses for the technology.In May, Blades tweeted about the release of a trailer for the upcoming summer blockbuster "Angel Has Fallen," in which actor Gerard Butler's character, a Secret Service agent is framed for the attempted assassination of the U.S. President. In the trailer, the president is wrapping up a day of fishing on a river when a member of his security team looks to the sky and says, "What is that? Are they bats?"Of course, they aren't."They're drones, they're drones," yells Butler as a 'swarm' of drones rains down from the sky and takes out unsuspecting victims."It was only a matter of time," wrote Blades, an ex-Air Force pilot.

"The average person doesn't get an opportunity to see drones spraying farms or inspecting wind turbines or any of that," said Blades. "They have this negative outlook because of the media. People are scared of 'drone swarms' and being spied on."According to Blades, military drone operations are used for attack missions less than 10 percent of the time."If I was a person who didn't know anything about drones, chances are I'd come out of this being scared of drones," said Blades.Where is the data?In 2018, there were over 100 near-misses between drones and aircrafts, according to the UK Airprox Board. This figure is used in the documentary to display the urgency of cracking down on drones with regulations."How do we know those 'near-misses' are drones tough?" asks Blades. "How is that validated? Right now there's no way methodology for 100 percent identifying a drone in those conditions. There have been plastic bags flying through the air and people have claimed they've seen drones."There is no evidence behind these recorded encounters other than witness testimony. Often times, there isn't a drone in sight. With the Gatwick incident, a noted centerpiece of the documentary, officials are still questioning whether there ever was a drone near the airport. Also, advancements in Remote ID could make similar scenarios manageable."With Gatwick, I don't understand," said Blades. "If I'm flying and someone spots a flock of birds near the field, I'd watch out for the birds and that would be it." 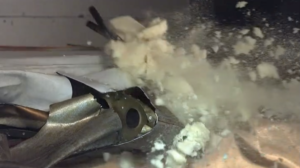 The aftermath of the impact testing in the documentary.

Drone stakeholders have also taken issue with a collision experiment depicted in the documentary where a mix of drone components are fired into the wing of an old business jet. The researchers also fire a gelatinous ball meant to simulate a bird strike and then compare the results. In the scene, host Kane describes the results as "catastrophic."While this makes for a dramatic scene, this segment includes no statistics on the likelihood of this happening or an aircrafts ability to land safely after sustaining damage.The National Drone Operators took issue with the test online, claiming that additional weight was added to the drone components to increase impact.https://twitter.com/drone_operators/status/1146113777445822465A couple days after the release of the documentary in an interview with London Live, Kane distanced himself from the scene, saying that the test "was probably not that scientific." In the same interview, he says that his experience with drones have been mainly positive and most operations are contributing to "a greater good" in what stakeholders took to be backpedaling on the claims of the documentary.https://twitter.com/LondonLive/status/1146477485930045440"There obviously needs to be more testing done on drone-aircraft impacts," said Blades. But it's expensive. No one is out there doing it right now. We need to be throwing actual drones into engines and seeing what happens, doing it all in a wind tunnel where proper conditions can be simulated. That testing can then be used in simulations after the fact, but that initial testing needs to be done."DJI laid out their issues with the testing in detail."The Impact Assessment testing shown on the programme can only be described as disturbing," wrote Stelzner. " The Horizon programme did the exact opposite, relying upon an artificial amalgam of a drone battery, and randomly placed rigid carbon-fibre rods, glued together. There is no conceivable way that this artificial “Frankendrone” provides any useful information about collision risk."Compounding the disturbing test is the choice of aircraft component," she continued. "The testing shown in the Horizon programme involved old parts from small planes that carry one to five passengers. Those results were then used to suggest the risk of a drone coming into contact with a modern commercial airliner carrying 250 plus people."UAV public relations"I think it's paramount for anyone's marketing campaigns to talk about provided services, but also talk about engaging with the public and presenting a positive image to the public. You have to think about that," said Blades.While plenty of drone manufacturers have spoken out about the BBC documentary, its likely more viewers have watched the film without any follow-up research."It's an uphill climb," Blades continued. "There's a section of the public that doesn't understand anything about the industry aside from sensationalized stories. Until you go out and show everyone what drones are being used for and how many businesses are using them responsibly, they will never see that side of the technology.The BBC publicly recognized the response by the industry, mainly DJI, but ultimately brushed off the accusations of sensationalism and one-sidedness."In the wake of the crisis at Gatwick Airport last year - and the strong public interest in this - we believe our Horizon investigation into the technology behind drones, and whether the related UK safety measures are adequate, was justified, fair and impartial," read a section of the BBC response.DJI is pushing for the inclusion of drone manufacturers and users in a future documentary focused on responsible, commercial drone application.The documentary does not do the drone industry any favours," Stelzner told Commercial UAV News. "It falls seriously short of the BBC’s responsibility to inform and educate its viewers in an impartial and accurate manner, instead painting a one-sided and overwhelmingly negative picture of drone technology. It hurts all those thousands of companies, entities and individuals who are operating in this space."

Is Our Airspace Safe? Why Counter Drone Technology is Necessary