Thermionic Generation: Is it a Viable Alternative to Extend Flying Time for Drones?

In our incessant search for alternative ways to power commercial unmanned aerial vehicles (UAVs) to enable longer flights and new, more complex missions, we sometimes come across technologies that are still in the development stage but are worthy of a closer look.

That is the case with a technology known as thermionic generation. It has been known for about 100 years, but until recently it only had levels of efficiency in energy conversion of 15% or less. Now with advances in new materials and electronics, a company, Space Charge LLC of San Diego, California has revived the idea with innovations that could bring its commercialization closer to a reality.

We had an opportunity to connect with Daniel (Dan) Sweeney, Co-Founder and Principal Investigator of Space Charge LLC for an interesting conversation on his company’s approach to this power source.

“A thermionic generator is a direct means of converting a thermal input into an electrical output,” Dan explained. “The actual conversion cell has no moving parts, although the balance of plant may have simple mechanical subsystems. Given the proper materials technology, service life is indefinite, and members of the related category of transmitter vacuum tubes have been operated at continuous multi-megawatt outputs for decades.” 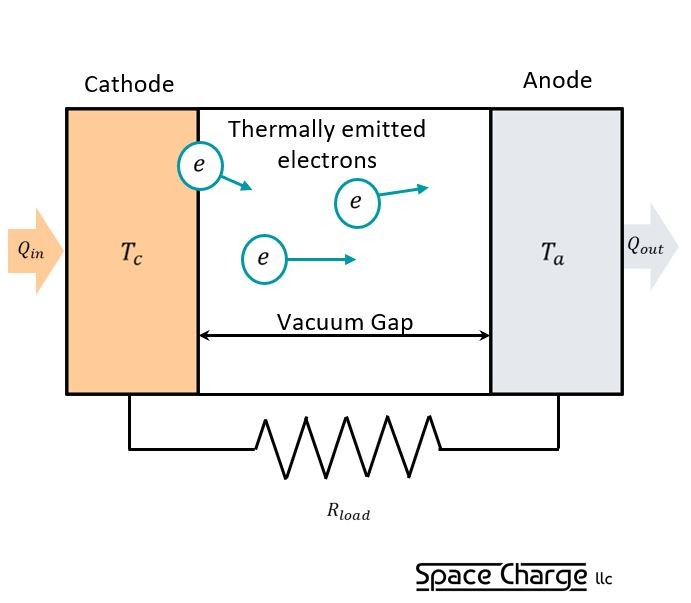 Space Charge has been testing different configurations and different materials for years. Their first-generation devices will put out multi-kilowatt outputs from an internal volume of approximately a liter, while optimized designs could maximally deliver hundreds of kilowatts from a similar form factor, depending, of course, on the heat source.

“The device becomes operational within a few seconds of turn on and can be configured to generate DC or AC at various voltages and amperages, which themselves may be precisely tailored to match electrical impedances and mechanical loads,” Dan continued. “Efficiency is now around 30%, but mathematical models indicate that figure can be doubled. Our goal is to render the device in silicon or a structural ceramic and to use wafer fabrication techniques to construct it, thus achieving production costs that are lower than those of competing power sources. Finally, because the system is cellular, it is highly scalable.”

When pressed about the relevance of thermionic generation for commercial UAV applications, Dan became excited about the possibilities of his technology for manned and unmanned aviation alike.

“The thermionic generator has the potential to make electric aviation mainstream,” Dan said with obvious enthusiasm. “Among available electric power sources, ours is the only one under development that can vie with gas turbines in terms of power density, which is definitely not the case with batteries or fuel cells. Our system is essentially heat source agnostic, although performance improves greatly with ascending temperature. We favor hydrogen while at the same time we recognize existing fuel storage subsystems are still suboptimal. The thermionic generator can certainly play in markets other than aviation, but it will initially be positioned as a high margin, high value component that can be profitable within niche markets. We are, incidentally, seeking additional investment and we are open to outright sale of the technology.”

We look forward to the day when Dan and his team at Space Charge can test a drone equipped with his technology, and we can have flights that can extend for hours and not just the 25 minutes of current technology. If you would like to connect with Dan directly, please contact him at [email protected]