Continuing to push forward in drone delivery, Amazon is now looking into experimenting with packing a bunch of ground and flying drones into a delivery van. A new patent made publicly available via the United States Patent and Trademark Office, describes Amazon’s system where delivery vans carry items almost to their destination, then send out and direct drones to do the final drop-off.

To achieve this, the patent writes about a primary vehicle 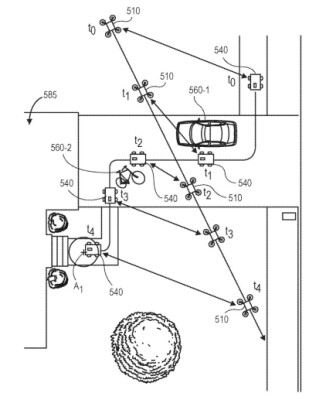 (a car, a van, a truck, a tractor, etc) outfitted or configured with one or more sets of sensors, computer devices, and communications equipment to control the operations of one or more secondary vehicles, referring to ground or flying drones. The primary vehicle can capture and process images or other data to analyze the surroundings, and determine positions or orientations of the secondary vehicle.

Amazon’s approach isn’t quite new, as back in 2017, UPS unveiled its plan to build drones right into trucks and launch them at various points along their route. Rather than focus on replacing drivers, UPS wanted to augment its drivers with drones to ease their workload, particularly when it came to reaching out-of-the-way places.

“The hardest part is getting the first one in the air,” Stephen Burns wrote at the time. “But if you look into the future, there may be corridors where drones are allowed to fly, all talking to each other, all talking to a ground station, talking to the trucks, and back to headquarters. That’s the technology that’s coming.”

According to UPS, using this system could save up to $50 million per year by cutting a mile off of every driver’s route each day. However, there’s no recent update about UPS’ advancements in the area.

As we move toward a future where cities will become increasingly smarter, these types of ideas are key to generate solutions that are more efficient, but also safer than traditional ones. While a patent doesn’t necessarily mean we will see this anytime soon, or even at all, it’s good to know that companies are still looking for new ways to put drones to good use.

Amazon’s patent describes even more scenarios than the ones previously mentioned, but they all end up sounding like Amazon’s delivery vans could work as a fully autonomous mobile drone-in-a-box solution. If you take into consideration that, in the patent, the company even considers robots like the Boston Dynamics’ Spot, then we’re even closer to that reality, especially if you think about Percepto’s AIM solution.

Drone Technology at ITS World Congress in Hamburg

Drone Technology at ITS World Congress in Hamburg