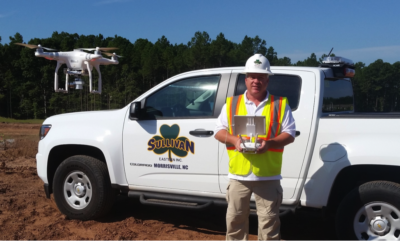 Based just outside of Raleigh North Carolina, Sullivan Eastern, Inc. is a leading site work, highway, and utility construction firm founded in 1993. Their projects cover commercial, residential, industrial, governmental, and municipal and include shopping centers, office complexes, subdivisions, apartment complexes, warehouses, schools, military bases, utilities, and roadways.Sullivan Eastern Inc. is a technically advanced firm, adding new methods when they can show them to be useful and cost effective. This includes GPS units mounted to the equipment such as graders and dozers, along with GPS rovers so they constantly know the ground shape before, after, and during. This allows them to track quantities, control costs and maintain project schedules.Living up to expectations is often a graveyard for emerging technologies! UAVs and drones have progressed far beyond their infancy in commercial applications, yet finding a clear business case for their benefits remains a work in progress. Adopting a UAV photogrammetry system had an immediate impact on the operations at Sullivan Eastern, Inc.Ralph Carson, a Project Manager with Sullivan Eastern, Inc. with a background in Geological Engineering, was looking to incorporate new drone photo technology with advanced software to calculate stockpile volumes quickly and efficiently, and in addition, create site topographic data. In looking for cost effective advanced software, they found what they needed in PhotoModeler. www.photomodeler.com

In one of their projects called Beaverdam (Figure 1), they flew drone missions before and after some topsoil removal. The original volume measured by PhotoModeler above the reference plane was 424,425.4 cubic feet or 15,719 cubic yards. They hauled away 249 loads, at approximately 12 cubic yards each, for a total removal of 2,988 cubic yards by truck slip verification. The site was flown again and the volume computed by PhotoModeler over the same reference plane was 347,423.5 cubic feet (12,867.5 cubic yards). The drone photogrammetry volume difference was then 2,852 cubic yards. Close, but why the difference of 136 cubic yards?It was determined that the first flight had not occurred until after lunch when the hauling had already started earlier in the day. Eleven loads had been removed already by truck ticket count (at approximately 132 cubic yards). 2,852 + 132 = 2984 cubic yards compared to the final haul logs of 2,988 cubic yards. A 4 cubic yards difference on 2988 cubic yards! Mr. Carson says the comparison is reasonable and shows how comparable the drone-based calculations are. 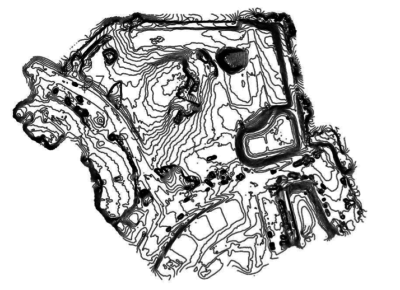 In another project (Figure 2), they compared the drone surface file with the bid-time CAD surface design. Using an 3D earthworks program, Agtek, they computed a volume between two layers. The photogrammetric project identified a topographical error that substantially increased quantities from those calculated off the plan topo. It was good to identify it, bring it to the Owners attention early for their input, and make site adjustments as the Owner sees fit. The contour data compiled by the PhotoModeler UAS software was the tool that provided a time sensitive, cost effective contour map of a 60-acre site. Sullivan Eastern, Inc prides themselves on accurate work and the drone photogrammetry work can help them with that.Mr. Carson concludes, “Everyone here is amazed at what can be done quickly with the drone and PhotoModeler software. Especially for a recent project, a site at 43 acres in size, which took 18 min of fly time with the drone.” He continues, “We can now efficiently fly over, after clearing the site and after grubbing, to confirm plan contours and note any errors up front and track monthly quantities of we want to.”With large acreage sites, we are able to fly the drone at low altitude, creating a complete, detailed 3D model. When viewing in plan view, it provides for a detailed site progress photo for the project owners. (Figure 3). 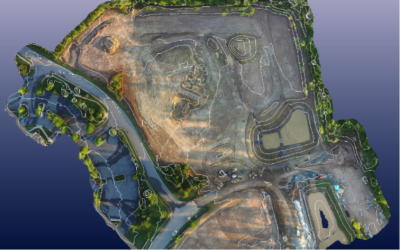 Sullivan Eastern, Inc studies technology, such as GPS, CAD, and 3D earthworks software, and adds them to their tool chest when determined to be accurate and cost effective. Drone-based photogrammetry with PhotoModeler has been a well accepted addition for them.Mr. Carson concludes, “PhotoModeler is a fast, accurate, cost effective tool to provide data in 3D models, calculate stockpile volumes, contour data maps with exportable files and provides the ability within the software to manipulate the 3D model to identify any potential site issues”.

Alan Walford is the founder and CEO of Eos Systems Inc., the developers of the PhotoModeler software since 1992. Alan is one of the world’s leading experts in digital close-range photogrammetry, the science of extracting measurements and 3D data from photographs. Alan graduated with Honours from the University of Waterloo in Systems Design Engineering, specializing in computer vision in 1986, and currently lives in Vancouver, Canada.

ASPRS Certification of UAS Mapping Professionals: Why Does It Matter?