As one of the world’s biggest industries, construction is always looking for new ways to improve efficiency while saving costs. In the last few years, drones begun disrupting standards of operations and making construction more efficient and sustainable through digital reconstructions of worksites to reduce process and analysis times, improve safety, and a lot more. However, the use of drones to perform some of the manual work isn’t something that many companies have focused on. SkyMul, a startup from the Georgia Tech Robotics Institute, wants to make one of construction’s most tedious jobs a thing of the past with SkyTy, an autonomous drone solution for rebar tying.

Founded in 2018, SkyMul’s initial concept was to improve logistics at construction sites by moving things from one place to another. After watching various construction sites’ time-lapse videos, the company found there was a two- or three-week period where there were no visible changes in the videos.

“We went back to the general contractors and asked, ‘Why is there no work done?’”, Eohan George, CEO of SkyMul, told Commercial UAV News. “That's when we realized they're doing the rebar tying at that point, which is why there's no physical work done. It’s all about tiny wires, so you don’t see that on the big image.”

Before selecting the drone as SkyTy’s primary tool, SkyMul also pondered gantry- and ground-based solutions. The problem with gantry systems is that it can take half a day to set it up, half a day to take it off, and, since it is not an easily scalable solution, there's a limit to how much you can speed up the rebar tying process. On the other hand, walking on top of rebar is already a challenging task for humans, so developing a ground-based solution is complicated and would probably take a lot of time.

“There's a lot of complexity in trying to do this,” George explained. “It doesn't mean that it is not solvable but there’s so much complexity trying to do those systems versus a drone [solution], which is more mobile and scalable when you want to.”

By leveraging machine learning and computer vision, SkyTy allows drones to autonomously scan and build entire rebar maps to find and classify rebar intersections that still need tying and plan the work ahead. 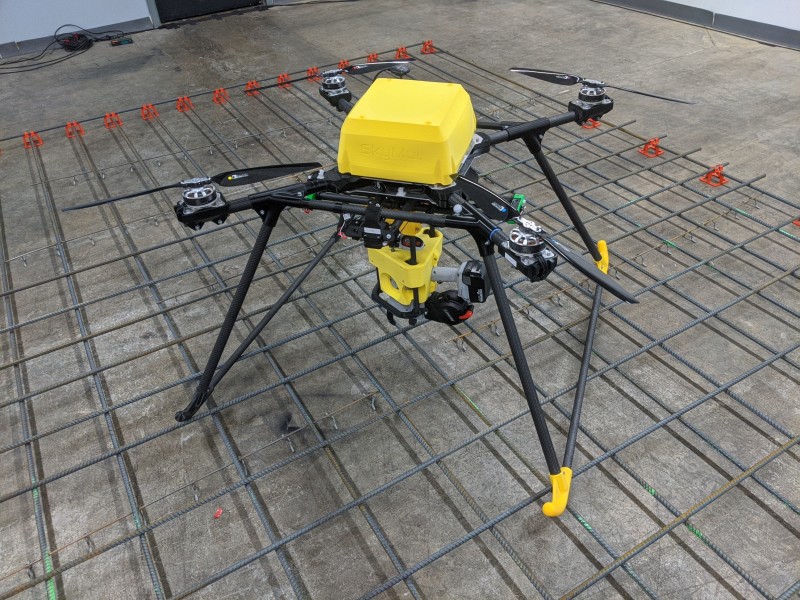 “After that, we allocate the multiple different drones to go and tie separate areas, while trying to avoid collisions between them,” George said. “Sometimes there are cases where you don't want to tie the entire stripes because people want to move on top of them, but all of those aspects can be controlled.”

Since a job can have varying work area sizes and changes in schedule, SkyTy can work with drone swarms to enable parallel work and increase throughput, completing jobs faster. With SkyTy, companies can expect 84% less labor, 2.4x faster processes, and cost savings up to 32%. Also, by keeping workers away from the site more than they need to be and not having to constantly walk and bend over rebars, SkyMul’s solution helps to avoid injuries, therefore improving safety.

In an initial phase, SkyMul wants to subcontract SkyTy as a service to contractors. In the future, the goal is to sell the drone itself to companies in the concrete business.

State of the Drone Industry: Construction

State of the Drone Industry: Construction