What Does it Mean to Use DJI Drones to Enable High Accuracy Mapping?

Last year, Commercial UAV News ran a webinar with AirGon LLC (a wholly owned subsidiary of GeoCue Group Inc) that was focused on what it meant to enable high accuracy mapping with DJI drones. After having done over 1,200 projects, some with quite a few larger companies in construction and mining sites, AirGon has been able to define what it means to get the most accuracy out of drones. That definition is something Lewis Graham, the president and chief technical officer at GeoCue Group, showcased in plain detail during the webinar.

Lewis was able to talk through a variety of topics that included everything from how to collect drone mapping data to how to ensure accuracy all the way to how such things impact the photogrammetry vs LiDAR debate. He also discussed AirGon’s various consulting services and the AirGon Mapping Suite, a complete software package for mapping from mission planning all the way to producing products.However, there were numerous other insights and topics from the webinar that we wanted to be able to fully highlight and explore. The Hardware

The image above shows a comparison between rotary and fixed-wing drones. Lewis concludes rotary/multirotor drones are generally the best platform for small site mapping, especially since it’s easier to fly these platforms in constrained areas. Also, the fact that the takeoff and landing procedure is fully automated, contrary to fixed-wing drones where you might have to step in and manually land it.What about the cost though? He puts a different perspective on the question.“Really, what you need to think about when you're aiming at high-accuracy mapping is the sensor package, not necessarily the platform on which the sensor rides”, Lewis explains. “And I'd like to point out that a good camera on a low-cost platform is a lot better than a mediocre camera on a high-end platform. There's also the big issue that drones, unfortunately, do occasionally crash, and how much money do you want to lose when that sort of thing happens? So, that's also a consideration when you're talking about drone mapping.”When it comes to high-accuracy mapping, apart from a good camera and gimbal, there are a few other things needed to take into consideration: camera calibration, an adequate planning and navigation system, the ability to reference to a geodetic network, and proper processing tools.Although there are many different choices of cameras for drones, the webinar focuses on DJI products, which is why Lewis mentions DJI’s Phantom 4 Pro and the Zenmuse X4S cameras as the standout products. Both are in the category of 1-inch sensors, which he considers a good sensor size for high-accuracy mapping. Then, another consideration is the type of shutter included in the cameras. The image below (on the right) shows the difference between a rolling and a global mechanical shutter.

“A rolling shutter is usually for sensors that don't have fast enough acquisition times to acquire the entire frame of imagery at one time”, Lewis continues. “So the rolling shutter is really an electronic device, not physical, and they read out line by line, so when you do that, you end up with this rolling shutter blur. You really need a mechanical (or global electronic) shutter for a mapping camera. With those conditions, what we're recommending in the DJI class of cameras is the X4S, which you can fly on an Inspire 2 or an M200, or the Phantom 4 Pro built-in camera.”Since prior generation DJI cameras, like the Inspire 1, use a rolling shutter, AirGon doesn’t recommend nor support them, as it causes various problems when trying to do high-accuracy mapping, particularly when calibrating the camera.Speaking of which, camera calibration is another important topic when discussing high-accuracy mapping. There are two types of camera calibration: the laboratory calibration, “where you put a target down, run through a procedure that gives you the intrinsic parameters of the camera (focal length, principal point offset, things of this nature) that are used in the structure from motion software such as Pix4D and Agisoft PhotoScan to create the point cloud in the Orthophotos”, says Lewis. The second calibration method is what he calls the “in-situ calibration”, which translates to on-site and is what most operators do.The impact of not performing the camera calibration comes in two forms. The first one is incorrect vertical scale measurements. For example, when measuring stockpiles, the height measurement will be slightly off and the captured data comes out wrong. The second is the bias error, where you know a particular point on the ground is supposed to be at exactly 200 meters, but the results are 10-15 centimeters off.On a short note, in terms of mission planning, Lewis recommends DJI’s Ground Station Pro application as it works just fine for both planning and controlling the mission. Reference a Geodetic NetworkA geodetic network is what ties the location (latitude, longitude, elevation) of the data collected with a drone with a reference coordinate system. Basically, it is the placement of data in the real world. Although software such as Pix4D, Photoscan, and DroneDeploy can perform these calculations by using dense image clouds, they still need to be tied to some sort of a reference network. How well this tie is established is called network accuracy.“When I talk about tying to a reference network, I'm talking about relating the mapping that you're doing to a state plane coordinate system, a Universal Transverse Mercator system, or your particular country regions’ reference systems”, continues Lewis. “So this is how you're able to take mapping information in one flight and relate it to those of another flight, or to Google Earth, so forth and so on.“On the other hand, there’s local accuracy, which is for measuring the dimensions of something - how long is a piece of wood, how high is the stockpile, etc. For example, it can be used for relative calculations like volumetrics, when you’re not worried about its position relative to the world.However, Lewis says “it's been our experience in an awful lot of mine site mapping that local accuracy is the final answer. That's initially what the customer says they want, but at the end of the day they say, well, I need these stockpile toes placed on Google Maps, or whatever it is they want to do that's going to require network accuracy”, hence that is why he thinks “planning for local accuracy is a pretty bad idea. You always want to plan for good network accuracy”.But how do you plan for high network accuracy? One of the most common and low-cost ways to do it is by placing ground control points, and then referencing these collected data with the structure from motion software. Although the results are quite accurate, it’s a time-consuming task, and there are a lot of circumstances where you're just not able to place those ground control points such as denied access to the site.This leads to another solution, a Global Satellite Navigation System (GNSS) positioning system. Simply put, a GNSS positioning system triangulates the location of a receiver through various satellites, and calculates the receiver’s position relative to the world. This system achieves accuracies on the order of 2,5 to 5 meters, which is fine for figuring out where you're going in your automobile, but not good enough for high-accuracy mapping.The solution is differential GNSS, which works with two receivers. One works as a Base Station, located on a known point on the ground, to compute the accuracy errors generated by it, while the other one is on the move, and you fix its errors with the information from the Base Station.There are two types of differential GNSS: Real-Time Kinematic (RTK) broadcasts the correction vector over to the rover by a radio link to accurately track it in real-time. If there’s no need to know the rover’s real-time location, you use Post-Processed Kinematic (PPK), which means the location of the rover is solved later on.By using differential GNSS, you can reach centimeter-level positioning accuracies, which translates to having errors on the order of one or two centimeters of the rover with respect to the Base Station. The chart below compares different technologies and applications. 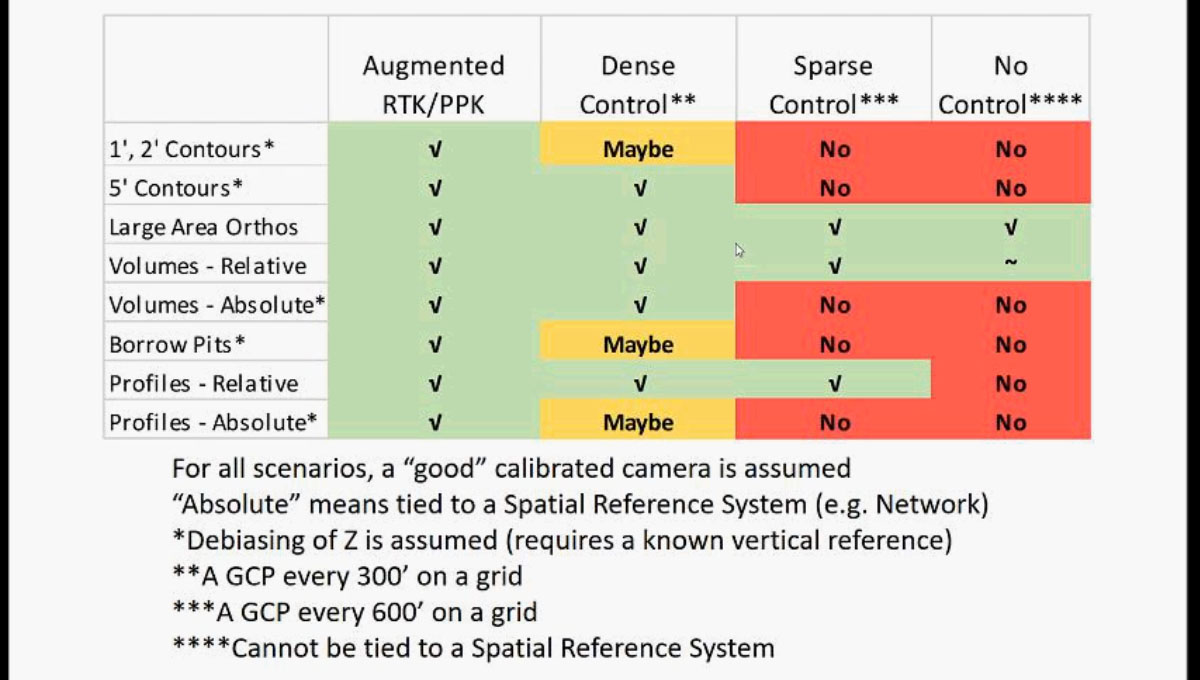 However, DJI drones do not feature PPK or RTK systems that are tied to the camera, which is why AirGon decided to develop one.“We started developing a Direct Geopositioning system for high-end drones, and we teamed with a company in Belgium called Septentrio that builds a very nice GNSS engine - the device that computes the locations based on the satellite constellations,” said Lewis. “About nine months ago we started looking at this and we asked, well, is there a way that we could add this to low-end or lower cost drones like the Phantom and the Inspire from DJI?”Initially, there was an issue on how to synchronize when the camera takes the picture to what the Septentrio’s AsterX-m2 GNSS engine records as the (X, Y, Z) location. DJI drones, like the Inspire or the Phantom, aren’t designed to work with these systems, don’t have the capability to send out a Mid Exposure Pulse (MEP) signal to the GNSS engine, which is used to know precisely in terms of time when each photograph is taken.How did AirGon overcome this problem? We talk about that in Part 2 of this series, where we also discuss what you need to do before sending your drone into the air, and show some comparisons between using different systems in real use cases. Read the following article to take A Look at the Real World Results of High Accuracy Mapping with DJI Drones.Click here to watch the full webinar

Practical Insights into Surveying with a Drone

Practical Insights into Surveying with a Drone

A Look at the Phantom 4 RTK from DJI