Many people have trouble interpreting infrared, or thermal, images captured by an industrial drone. They don’t understand what they’re seeing, and thus do not get the most out of their investment in thermal technology.

This isn’t because thermal imaging is incomprehensibly complex, but because it is a fundamentally different way of experiencing the world compared to what we see with our eyes.

The first thing to get comfortable with is the fact that infrared cameras see a different type of energy than you see with your eyes. Your eyes—and your typical drone camera—see visible light, while a thermal camera sees infrared energy.

According to Kelly Broadbeck, UAS product manager at Teledyne FLIR, “while visible and infrared are both parts of the electromagnetic spectrum, what differentiates them is their wavelength. Electromagnetic energy travels in waves, so the wavelength is the physical distance from the peak of one wave to the peak of the next.”

In the infrared spectrum, these wavelengths are typically measured in micrometers, or a millionth of a meter. Visible light spans the waveband from 0.4-0.75 micrometers (often shortened to “micron”), while the infrared energy detected by most drone thermal cameras spans the 7.5-to-14-micron waveband.

These points provide the basis for some fundamental facts people need to understand when getting into thermal imaging. First, a given detector is only sensitive to—and can only see—a certain range of wavelengths. “Your eyes and your typical drone camera are sensitive to and see visible light in the 0.4-0.75-micron waveband,” Broadbeck explained. “Infrared energy’s wavelengths are much too long for our eyes to see—that’s why thermal cameras can ‘see the invisible.’” 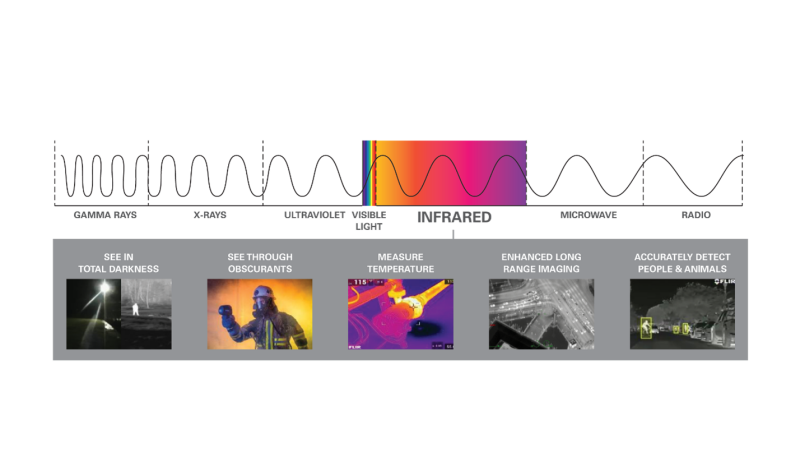 Because of this, we must assign false colors, shown as different color palettes in your thermal camera, to the varying intensities of infrared energy detected by the camera. That’s what you’re seeing with a thermal camera: varying intensities of infrared energy that come (mostly) from the surface of the object you’re looking at.

Heat vs. Temperature
Another problem in interpreting infrared images is that many people confuse heat energy with temperature. They are not the same thing. When something looks “hot” to your thermal camera, that just means it’s giving off more heat energy – it may be a higher temperature, and it may not.

All of the molecules that make up everything on earth are oscillating,” Broadbeck explained. “As you add heat energy to a substance its molecules will oscillate faster, creating more friction between molecules, and therefore increasing the substance’s temperature. What we see with a thermal camera is the amount of heat energy coming off something, not its temperature.

Energy that is coming from an object directly is called emitted energy. “This is energy contained in the object and being radiated from it,” stated Broadbeck. “Reflected energy—just like you’re used to seeing with your eyes—is thermal energy that originated from something else but bounces off the object you’re looking at and into your camera.”

When energy from something behind the object you’re looking at passes through your object of interest, that material is said to be “transmissive.” That means, the energy you’re seeing is being transmitted from your object of interest, not emitted from it. Everything you see in an infrared image is some combination of emitted, reflected, and/or transmitted energy. This relationship can be shown mathematically like this: Emitted + Reflected + Transmitted = 1 (with one representing 100 percent of the infrared energy being seen).

The good news is that relatively few things are significantly transmissive to longwave infrared energy, so the vast majority of things you’ll see are a combination of emitted and reflected energy (Emitted + Reflected = 1). The bad news is that an object’s transmissivity to infrared energy can be exactly opposite of what you’d expect if you’re still thinking of visible light.

Thin film plastics like tarps and garbage bags are highly transmissive to infrared—so you can see through them with a thermal camera—but they are opaque to visible light. You can’t see through them with your eyes. Conversely, normal window glass is highly transmissive to visible light—or they wouldn’t make very good windows—but they are almost entirely opaque to infrared.

These properties often trip up new operators: not only can they not see-through glass with an infrared camera, often they will see reflections in the glass in infrared. To properly interpret a thermal image, an operator must know what they what you’re looking at and understand its thermal properties in order to understand if the energy that looks like it’s coming from that object actually is.

How Hot is “Hot”?
The measure of how efficient an object is at radiating its heat is called its emissivity. Emissivity is a ratio of the energy in an object compared to how much energy it’s giving off, and these ratios are shown as values between 0 and 1.0. Therefore, an object that is 90 percent emissive has an emissivity of 0.9.

“Remember that everything you see is some combination of emissive and reflective,” Broadbeck said. “So, if an object is 90 percent emissive, it is 10 percent reflective.” 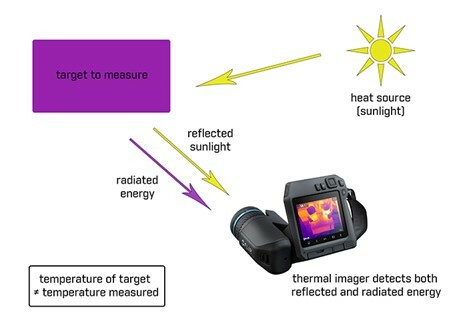 How emissive or reflective an object will be determined by the following six things, in decreasing order of importance:

When measuring temperatures with a thermal camera, doing a quantitative inspection, all of the above variables need to be compensated for if you want to generate what’s called a true temperature.

In the weeks to come, watch Commercial UAV News for more articles in this series.